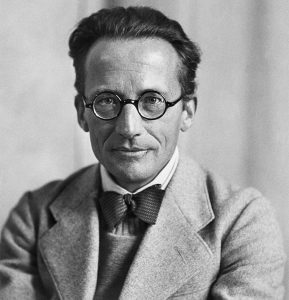 Shortly before the Christmas break, I delivered the manuscript of A QUESTION OF TRUST, otherwise known as Book Two in the Mathematical Mysteries Series, to my editor at Farrago. Put like that, it doesn’t sound terribly scary. However, what you need to know is that the seventy-odd thousand words in that manuscript hadn’t previously been seen by anyone else at all, primarily because of my inept deadline management as described in the previous post to this one.

So it was entirely possible that any number of things could have gone horribly wrong with what I’d delivered. The jokes could have fallen flat. The character developments I’d envisaged could have been completely wrong. In fact, the entire plot could have been absolutely terrible.

Which is why I very much felt that at the time I delivered it, A QUESTION OF TRUST was Schrödinger’s book (that’s him, there, BTW <- say ‘hi’). It was in a completely unknown state, simultaneously dead and alive, until the editor’s verdict was pronounced and the waveform duly collapsed.

Thankfully, Abbie at Farrago hinted before Christmas that she was enjoying what she’d read so far – which, for all I knew, could have just been the title page, but it was enough to get me through the festive season without being too unpleasant to my family. The final verdict arrived this week and fortunately it turned out that the book was not entirely without merit, so we are good to go with the edits. Scary business, though. In many ways, it’s far easier to come up with something out of the blue than to produce a follow-up, because there’s no expectation. I just hope that the readers out there will feel the same way about this one as they did about THE TRUTH ABOUT ARCHIE AND PYE. I think they will, but then I would, wouldn’t I?

Speaking of ARCHIE AND PYE…

Considering what I’m usually like, I haven’t made a lot of fuss here about the splendid reviews that it’s had over the last few months. This isn’t for reasons of modesty (because, obviously, I’m not like that), but more because of having spent most of the time scribbling frantically away at Book Two (see above).

Anyway, if you fancy having a quick gander at them, most of them are on Goodreads and those that aren’t are on either Amazon UK or Amazon US. Don’t believe any writer who claims not to read their reviews, by the way. They are lying. Or at the very least more disciplined than I am, anyway.

I was particularly chuffed to see ARCHIE AND PYE turn up in a few best-of-2018 lists at the end of the year. Here’s Scott Pack, for one:

This mathematical thriller is very silly but equally clever. Shades of Douglas Adams. If you want to immerse yourself into a book that is fun from start to finish then you won't go far wrong with this. pic.twitter.com/cTHgNDO8Fl

I also want to give a shout out to a book that I have read in a different capacity and, therefore, not reviewed but which I have a huge soft spot for. That book is The Truth About Archie and Pye by Jonathan Pinnock. It is hilarious, and I urge you to read it.

The Truth about Archie and Pye: a mathematical mystery  by Jonathan Pinnock (Farrago) – an off-beat, quirky thriller. After a chance encounter on a train, Tom Winscombe finds himself in possession of a case full of mathematical equations that everyone (including the Belorussian mafia) seems to want, and they’re not afraid to kill anyone standing in the way. It’s fast-paced, funny, and you don’t need to know anything about maths to enjoy it.