I was once sufficiently clued up in the theory of music to pass an O level in it. I also somehow managed to scrape through Grade VIII on the oboe. Surprisingly, however, despite these stellar achievements, I never quite made it as either composer or musician. However, if a thing’s worth doing, it’s worth doing badly, so for your listening pleasure, or otherwise, here are some MP3’s …

This is my notorious Dance for Oboe Trombone and Piano, Op.1:

The piece is performed by my two stepbrothers, Michael and Julian Brandon (Trombone and Piano, respectively) and myself (Oboe). Michael deserves especial credit for dealing manfully with a score that I’d written in C Major, so that I didn’t have to bother with any tedious sharps or flats. Unfortunately, C Major is a hideous key for brass players. And, yes, it was recorded a long, long time ago. And, no, I haven’t written anything else since. There never was an Op.2. 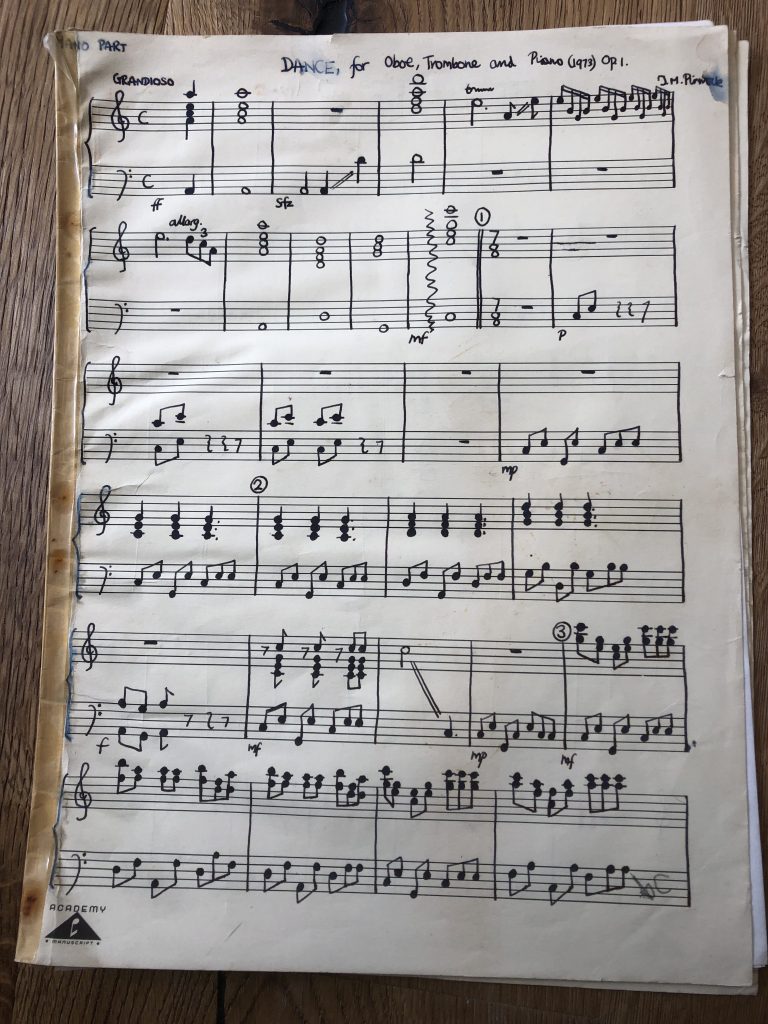 Ah, now you’re talking. In my last year at university, I answered an ad asking for people to join a spontaneous music group. Well, several others did as well, and the net result was that we ended up improvising like fury every week, making some very strange music. We taped pretty much everything we did, and I’m very pleased to present a couple of examples for you here. Occasionally, against all the odds, a fully-formed piece emerged from the overall chaos, and this was one of them:

And sometimes, it was a bit angrier, like this one (the real fun starts about two and a half minutes in):

Most of the time, as you may imagine, it was pretty awful; trust me, I’ve listened through all the old tapes. The final nail in the coffin was our choice of name for ourselves: Misunderstood on the Way to Sanesberries. No, I don’t remember what it meant, either.

There’s a strange postscript to all this. When I moved to London to start work, I attempted to set up a similar group in Streatham (yeah, I know). I got one response, from a guy who was more into writing songs and poetry at the time. I thought he was a complete loser. Recently, I was clearing out some old papers and I came across the note and spotted the name on the bottom – John Hegley. Which just goes to show what a shrewd judge of talent I am.