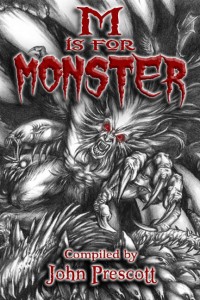 A while back I was contacted by Bec Zugor, a writer friend who I’d met on Café Doom, asking if I fancied taking part in a venture called the Monster Alphabet Book which was being organised by the horror writer John Prescott. The concept behind the book was that each author would take a letter of the alphabet and write a story about a monster starting with that letter. Which sounded a pretty cool idea.

So I got in touch with John and I ended up being allocated O. I then had to find a suitable monster to go with O. Ogre seemed a bit obvious, so I had another look and I eventually came up with Ourobouros, which I felt had some interesting possibilities. I duly sent it in, and I’ve just heard that it’s been accepted for publication.

The book is coming out in time for Halloween next month, and as you can see from the picture it has the most awesome cover. There are loads of ace authors in there, too – people like Bec, Geoff Nelder and Paul Freeman to name but three. More about it nearer the time.