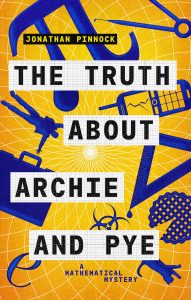 As I’ve already mentioned, A QUESTION OF TRUST, Book Two in the Mathematical Mystery series, is coming out in April. Obviously I’m excited about this, because the thrill of getting a book published never wears off. But I’m particularly excited because, as the second book in a series, it gets a cover that matches the other book in the series (and don’t they look good together?).

But there’s more. I’ve just signed a new contract with Farrago to write two more Mathematical Mysteries, which means there are very soon going to be four of the buggers, all with matching covers. I almost feel like a proper author now.

I’m still kicking around the precise details of the plot, but I think I can safely reveal that the book is almost certainly going to be called THE CURSE OF THE VAVASORS. I can also safely say that you’re going to like it.

Now, for those of you who are currently touting your work around agencies and independent publishers and getting rebuffed at every turn, I’d like to offer you a few crumbs of comfort. I don’t think I’ve shared these with you before (at least not here), but here are the stats on Archie and Pye.

In total, I submitted THE TRUTH ABOUT ARCHIE AND PYE to 42 agents and 10 independents. Of the agents, 15 didn’t bother responding at all, another 12 gave a form rejection, 9 gave a nice, personalised rejection and 5 asked to see the full manuscript, before saying no, and one responded too late after I’d already signed with Farrago. Of the independents, 6 didn’t bother responding, one gave a form rejection and 2 gave nice, personalised rejections.

And then Farrago said yes.

(I still haven’t got an agent, by the way, but for the time being I’m cool with that.)

So I think what I’m basically saying is this: