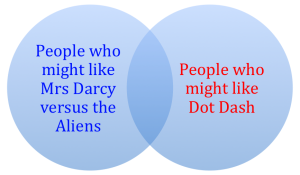 This is the most fascinating Venn diagram in my life at the moment. One of my big worries when I was blogging “Mrs Darcy versus the Aliens” was how it would affect my street cred as a writer. That sounds really arsey, I know, but a part of me does want to be taken seriously, even if it’s a part that’s in constant conflict with the other part of me that just wants to spend the day composing knob jokes.

So it was something of a relief to me to find that several of the literary short story writers that I looked up to seemed happy to indulge me (and even more of a relief – not to say surprise – when an imprint of Salt decided to publish it). But I’m even more intrigued now to know what Mrs Darcy’s readership will make of Dot Dash. It is a very different book, after all, although I guess you could probably tell it was written by the same bloke.

So far the reviews are looking pretty positive, anyway. This is what they look like on Amazon (including a couple by complete strangers, which is always particularly gratifying). And here’s another one that appeared today, courtesy of Our Book Reviews (who’d previously given Mrs Darcy a major thumbs-up).

One of the writers who gave Mrs Darcy an unexpected endorsement was Tania Hershman, and – somewhat belatedly (it’s been a busy week or so) – here’s a link to an interview I did with her a little while back. Whilst you’re over there, I do recommend taking her up on her offer of a customised edition of her wonderful book “My Mother was An Upright Piano” – a brilliant idea for a present for that literary chum who’s impossible to buy for.

Finally, don’t forget that the Salt Kindle 77p deal is STILL on. Half a dozen terrific books at an absurd knock-down price. Further to my previous post on the subject, I’ve now finished Carys Bray’s “Sweet Home”, and I can confirm that it is indeed an excellent, if at times quite harrowing, collection.