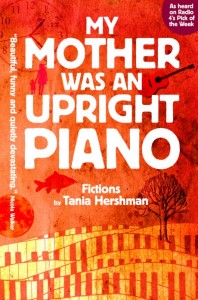 I should start this with a disclaimer: Tania Hershman is a friend of mine. Not only that, she has very generously provided a lovely blurb for my own forthcoming collection (see left). However, I would also like to point out that I wouldn’t have asked her if it wasn’t for the fact that I’m a massive admirer of her work. Also, I paid for my copy of “My Mother Was An Upright Piano” with my own money – in fact I went for the luxury option with the personalised handwritten extra story in it. So there.

Hershman’s first collection, “The White Road” was a terrific read, full of (literally) dazzling invention, but in many ways it was only a hint of what was to come. In the taut fictions of MMWAUP, Hershman has moved into a different world altogether, where meaning is constantly fluctuating and frequently elusive. I think it’s significant that the stories that engaged me the most, such as the title story and “forty-eight dogs”, were the ones I’d come across before and I’m sure it’s a book that will reveal more and more on re-reading.

MMWAUP is the work of a grown-up writer who has gained the confidence to let her muse off the leash and to follow it wherever it goes, however unexpected that turns out to be. However, that’s not to say that these stories are in any way self-indulgent, because there is always a logic to them, even if it isn’t always immediately apparent, and every word is there for a reason. Now that’s a description that could equally apply to poetry, and I think Hershman is actually carving out a territory of her own somewhere between the two forms. It will be fascinating to see where she goes next.

2 thoughts on “Review: “My Mother Was An Upright Piano”, by Tania Hershman”