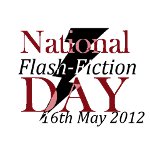 Is it really nearly two weeks since I last blogged? I fear it is. There is a good reason for this. I’m deeply immersed in finishing off my current WIP, which is turning out to be a whole load more exciting than I ever thought it would. I just hope that somewhere out there is a publisher who agrees with me when I finish it (some time next week, I hope).

In the meantime, however, I seem to have accidentally signed myself up for eight cuts‘ Flash Slam in honour of National Flash Fiction Day tonight, organised by the indefatigable Dan Holloway and judged by the utterly awesome Tania Hershman. When I say it was accidental, I really do mean that, because Calum Kerr (a.k.a. Mr NFFD Supremo) e-mailed Tania and myself asking if it was OK if he sent Dan our contributors’ copies of the NFFD anthology for us to pick up on the night. This was something of a surprise to me because I wasn’t actually intending to go at the time. However, I was feeling bad that I wasn’t doing anything to celebrate NFFD, so I decided on the spot to go in for it and Dan managed to squeeze me in to the programme.

So if you want to watch me make a fool of myself, do come along to the Albion Beatnik Bookstore in Oxford at 6:30PM tonight. It should be a lot of fun. And if you haven’t done so already, do go and buy a copy of Jawbreakers, the utterly excellent NFFD anthology. I’m in it, but so are a whole load of much better writers as well, including Ali Smith and Ian Rankin.

Oh, and I haven’t forgotten I’ve got a giveaway to sort out, as well as LOADS of reviews. I’m actually thinking of starting up a feature called The Late Review, so long is it since I’ve read some of the books in my “to review” pile.