I’ve known Dave Weaver for several years now as a fellow-member of the bestest writers’ circle in the whole wide world and I’ve watched as he’s matured into an exceptionally versatile writer as well as an extremely perceptive critic. He’s just brought out a couple of collections of his work on Kindle, so I thought it was a good time to have a chat with him about his work.

At what point in your career did you feel you could start calling yourself a writer?

There are probably two points in my ‘ahem’ career as a writer when I actually felt able to describe myself as one. The first was very early on, actually my first entry to a Verulam Writers’ Circle short story competition where a piece I wrote called ‘Charlie’s World’ came in third. I’d written a very bad book a few years before to kick off my writing, a complicated sci-fi plot, overwritten with every exhausted trope going. I’d followed that with a very very long ‘short’ sci-fi story which bored everyone who’d had to sit through it senseless to a throat-slashing extreme. The subject for the VWC competition was ‘Bird-Flu’ (that Summer’s chosen national panic) and I decided to see the action through an autistic child survivor’s perspective. This meant that the narrative had to be a simple and very basic description of the death and decay that was happening around an uncomprehending Charlie. It unlocked my writing style immediately; say what you see, write what you mean, keep it as simple and uncluttered as possible. Simplicity equals power – over-complication equals dissipation of power. Stories only went wrong after that when I got carried away with myself and over-explained or over-described; then I’d remember ‘Charlie’s World’ and cut back until things generally fell into place again. The other much later point as a ‘writer’ came when I’d finished the first draft of my novel ‘Jacey’s Kingdom’ and belatedly realized I could finish a story arc to a full novel which actually worked and made sense. That made up for the sorry mess of my first attempted book before I’d had the invaluable schooling of the VWC.

Tell me a bit about your two new collections. 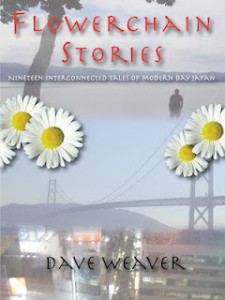 ‘Flowerchain Stories’ is a set of nineteen interlinked tales set in modern day Japan. I say interlinked because the premise is that a minor character in the first story becomes the major character in the second and that pattern carries then on through-out the collection until we find what connection the subject of story nineteen has with the subject of story number one; the ‘flowerchain’ of linked stories is closed and complete. I suppose the ‘trick’ for the reader might be to guess which seemingly unimportant personality in each story will be chosen to head up the next one. Some are obvious, some much less so. Of course this is not new; Arthur Schnitzler wrote the play La Ronde based on the same premise in 1897. These were exclusively sexual encounters between Vienna’s different classes though, and as far as I’m aware didn’t feature ghost children, time travel or unwise sleep experiments. A few of the characters continue through two or even three of the stories and I must admit I got quite attached to some of them and didn’t want to leave them behind as a new story began. One interesting aspect of the structure is that it gives the reader the chance to see a different side of a person they might have initially disliked as their backgrounds and motivations are fleshed out and explained more. The first story is a good example; a wealthy yob named Junichi becomes a sympathetic and rather brave young man in his own story which follows. That’s the first one given away then. 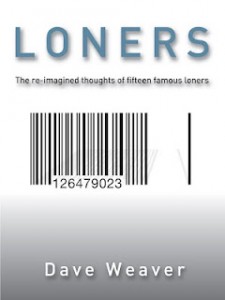 ‘Loners’ are fifteen pieces about… Loners, funnily enough, although in this case famous ones. About half are written from their own (imagined on my part) perspective, usually at a perceived crisis point in their lives including the point of their own death. I haven’t named any of them but the reader will almost certainly identify most immediately even if some are now just distant memories. The other pieces are parodies of famous loners from literature. They take in such diverse works as Enid Blyton’s Famous Five (George), the Twilight saga (Bella) and Jane Austen’s Pride and Prejudice (Elizabeth Bennet texting Mr Darcy on her mobile). Sorry about that, Jane [it’s OK, I think she’s suffered worse – JP]. They even take in a rather confused Hamlet and the original loner himself, Adam, getting some hot tips from the big guy for his First Date. So a bit of a mish-mash then, but hopefully also a compassionate and amusing read and maybe even a small insight into what makes the character of ‘the loner’ so fascinating for us both in real life and make believe.

At what point did you realize that “Flowerchain Stories” had a linking arc?

To my amazement I had a Hiroshima-based story called ‘Finding Uncle’ chosen as one of twenty included in the University of Hertfordshire’s ‘Visions’ anthology. This was my first published story and obviously a stand alone piece, but a while later I wrote a story about two strangers meeting on Mount Aso volcano in Kyushu, Japan, a fascinating place I’d visited with my family a few years earlier. I had the idea of linking the two pieces then trying to build stories outwards from them, just to see how far I’d get. If I could manage six or seven then there was no reason why I couldn’t continue until I had a novel’s worth, or at least a long novella. I’d learned just a little about the way Japanese society worked and had only visited the country twice, so I decided to write the stories with my own perceptions and insights of the country and only include everyday details when it was necessary for the plot or to bring a characters’ background into focus more. They are stories about Japanese people through the eyes of a ‘gaigin’, a foreigner, not a native. Hopefully this may give them a more unusual dimension.

Would you count yourself as a “loner” from a writing point of view, or do you see yourself as part of a particular movement?

I like to write about the moment reality tips into fantasy, or at least have my characters walk a tightrope between the two, which isn’t a particularly unusual concept. I prefer my stories to be as unencumbered by needless imagery and metaphor as possible, but I think most writers would agree that’s a good thing to aim for. I try to have an emotional theme running parallel with my story, so that there’s some underlying point to the action rather than just a trip from A to B for the sake of it. I think that’s just good story-telling though. Maybe I do have a rather personal (what isn’t personal?), even odd, view of the human condition; I don’t like obvious displays of emotion, better to keep it locked up so it seeps out gradually as the tale progresses. I’m a bit cold and analytical, but then when the emotion does come I’ll hopefully catch the reader unprepared. I suppose we’d all like to consider our own style unique and in a way it is, but the uniqueness of a piece works much better if its unforced and springs naturally from the writing. All writers are ultimately loners.

Your covers are very striking – particularly the one for “Loners”. Do you think your work as a graphic artist informs your writing, or are they two separate disciplines?

You can’t beat a striking image, whether visually or in words. I think I have a visual sense of humor which helps in my writing. I write filmically; I play out the scene in my head then write down what I’ve just observed, like writing up a play while you’re watching it. I don’t know how else to do it. Perhaps everyone writes this way, I don’t know. The cover for ‘Loners’ came straightaway, I used the first idea I had in exactly the way I saw it; it was simple and worked. We always think of loners as being people but its funny to think of inanimate objects also having the loner gene; like they’ve got souls too, even barcodes.

What was the rationale for publishing these collections now?

Although ‘Flowerchain Stories’ was written without a competition in mind I thought the unusual format would fit Salt’s Scott Prize short story collection competition. Unfortunately the fit must have had a few rough edges so as there was no way a collection of short stories about Japan by a complete unknown was ever going to be taken up and published by anyone else I thought I’d employ it as my introduction into the brave new world of digital self-publishing. It was so much easier than I’d imagined that I decided to do the same thing with the ‘Loners’ collection as both seemed to have a strong enough overall concept to market them as something slightly different to the usual ones.

Where do you see your writing career going next?

Well, apart from down the toilet [very unlikely – JP], I’d like to think I might be able to get my first novel ‘Jacey’s Kingdom’ taken on by a publisher, even as an e-book. Failing that I would probably do it myself again. I have a collection of science fiction stories once again connected by a theme called ‘Tales from the Black Hole Bar’, which I’ll enter for competition then (inevitably) self-publish next year. I’m working on a second novel, a ghost story called ‘Red House’, which I hope to complete by the end of the summer. I will probably concentrate on novels from now on with the occasional short story for competition. I’d like to write either a ghost story series or continue with book two and three of ‘Jacey’s Kingdom’, depending on its success or lack of it.

What is your favorite cheese?

Many thanks to Dave for some fascinating answers there. Dave blogs here, and the books are available here. I really do recommend them.

One thought on “Interview with Dave Weaver”