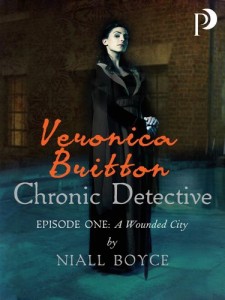 I’m very pleased to welcome fellow Proxima Books author Niall Boyce to my blog today. Niall is the very talented author of the utterly fab Veronica Britton: Chronic Detective serial, parts one and two of which are currently available from Amazon here and here respectively. If your taste is for an action-packed mystery story featuring a feisty time-travelling detective as a heroine, do yourself a favour and download both of them at the first available opportunity. You won’t regret it.

But do read the interview first.

Hello and welcome to the blog, Niall. I’d like to find out a bit about you yourself first. You’re a senior editor at the Lancet in your day job – I’m interested to know if your background is primarily in arts or science?

I studied English at A-level, and was seriously thinking about applying to do it at university – but medicine won out in the end. I have a medical degree and a PhD in physiology, and worked as a doctor for some time. I suppose my background in science explains why so many of my favourite authors – Kurt Vonnegut and Christopher Priest for example – didn’t go through the arts degree/creative writing route. I lack grounding in the theoretical aspects of English literature, and this means I have had to go the long way around learning certain parts of the craft. Then again, it means I’m not hemmed in by various preconceived notions and, frankly, snobberies.

Always good to come across another Christopher Priest fan! How do you find creative writing fits in with your non-fiction work?

An interesting question. In terms of content, science fiction is, to me, about conducting a thought experiment – reasoning out the consequences of a temporary suspension of the laws of physics or biology isn’t very different to what scientists do every day.

With regard to style, my preference is for clear prose – this isn’t the same thing as saying I don’t like complexity. The purpose of science writing is to make difficult ideas easily understandable to a large number of people, many of whom may not have English as their first language. It’s probably been said before that doctors who write have certain traits in common. The tendency is to avoid flourishes, but to pack a lot of information into a relatively short word count, with an emphasis on telling, pivotal details. This certainly applies to medics such as Arthur Conan Doyle, Joseph Conrad, and Arthur Schnitzler. They’re all very different in terms of subject matter, but I think you can trace a characteristic medical/scientific style in their writing.

As for the grind of writing – I set aside half an hour every day and write 500 words. I think getting precious about these things is the enemy of actual creativity.

I hadn’t realised until I looked at your blog how many short stories you’d had published (including some that I’d already listened to on the Liars’ League podcast). Do you see your future as purely a writer of full-length fiction, or do you think you’ll still continue with short forms as well?

I like short stories a lot and, as I said, there’s something about a medical background that tends towards brevity in prose. I’m planning to continue with both novels and short stories: the idea dictates the form. For example, I have written a few ghost stories, and I think these work best in the short format (either as short stories or novellas). Veronica Britton is rather more complex, and I think a longer format was needed to give the situations and characters space to breathe.

How did you get involved with Big Finish? When will we see your name on the credits for the Doctor Who TV series?

Doctor Who came about when Big Finish put out a call for new writers. I was just lucky that my submission was chosen (although I had previously written a few Doctor Who DVD sleeves and commentaries). I had a neat idea for a short story that would take the original rules of the show (eg, the Doctor couldn’t get his companions home), and blend in some things that wouldn’t or couldn’t have been done at the time. 1963, the year the show started, is now a historical era itself, and many of the attitudes and assumptions of the characters are things of the past. So it struck me as an interesting thing to explore.

I’d love to write a TV episode – in fact I have a cracking idea for one – but I’m not anticipating a call any time soon. Doctor Who is so big now that a strong track record of TV writing seems to be the minimum requirement. More Big Finish would be good. My story for the Bernice Summerfield range (The Empire Variations) was one of the most fun things I’ve written: being able to put Andy Warhol face-to-face with a giant floating alien dinosaur head was tremendous.

Ha. I bet! Veronica Britton features a strong, complex female heroine. Can you tell me a bit about where the inspiration for her character came from? And who would you like to see play her in a film adaptation?

I always saw the hero of these books as a woman: one reason for this is that I think women are rather more adaptable than men, in all sorts of ways. If time travel ever comes to be, I imagine women will be far better at it. So you’ll see that the male time travellers in VB are all rather bull-in-a-china-shop, whereas Veronica is more subtle, honest, and brave. As for who would play Veronica, I think Nicola Walker (Ruth from Spooks) would be ideal.

Did you see “Veronica Britton: Chronic Detective” as a serial right from the start?

I think the nature of good adventure fiction is that it consists of a series of cliffhangers, whether those come within a single story or in instalments. So I was keen on building plenty into Veronica Britton from the start. Every decent adventure narrative – from Exodus to King Solomon’s Mines and beyond – keeps you asking “How on earth are they going to get out of this one?” I think it works as a whole (the complete story is around 120, 000 words) or as individual episodes.

Do you think that electronic publishing is creating a new market for serials?

Although text-based serials declined in popularity through the twentieth century, serial fiction still persisted and thrived in the form of TV series and, of course, comics. Speaking for myself, I far prefer getting the new issue of “Buffy the Vampire Slayer” every month to waiting for the trade paperback. Though whether or not e-serials are viable depends on the method of selling: it certainly seems to have worked for e-comics.

What are you working on next?

My next project is a novel about parallel universes, Arthurian legend, a TV show about a mysterious scientist, and 1970s Swansea. I’m currently at the phase of scribbling lots of different scenarios and bits of dialogue down on index cards: in 2012, these will hopefully coalesce into a seamless whole…

Fascinating stuff! Many thanks to Niall for dropping in. Now go and buy those first two episodes, OK? Seriously, they are very good indeed.

2 thoughts on “Interview with Niall Boyce”