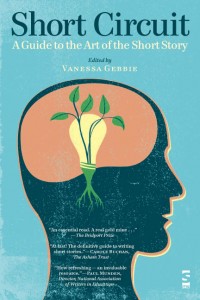 I don’t usually do reviews of other people’s books here, or indeed interviews. This place was always intended to be a vehicle for my own ego, after all. However, when the opportunity came up to join Vanessa Gebbie’s promotional blog tour for “Short Circuit”, I was very keen to get involved. The next problem was what form this should take, as by now most of the sensible interview questions have already been asked on other blogs. So what we’ve gone for instead is a combination of review and interview-ette – a bit like those keynote CD reviews that you see in Mojo. If you read Mojo, that is. Anyway, here goes.

What I like about “Short Circuit” (subtitled “A Guide to the Art of the Short Story”) is that it’s a book for grown-ups. It assumes that we know the “rules” and that we’re ready to move on to the next stage. So, for example, there is (as far as I can remember) no mention of the – admittedly generally useful – “Show, not tell” rule. This is good news for those wishing to imitate, say, the work of A.C.Tillyer; I’m currently reading “An A to Z of Possible Worlds”, which technically speaking is almost 100% “tell”, but which works superbly because the style is entirely appropriate to the stories. (It’s also a lovely artifact in its own right, and a wonderful counter to the onslaught of the e-book. Buy one now, before they run out.)

When I first started writing short stories seriously, I took to examining the names of the people who got listed in various competitions, and I used to track down stuff that they’d written to see what I could learn from them. One of them, of course, was Vanessa Gebbie herself, who seemed to be everywhere. She still is, of course, and she must have been a shoo-in for the role of editor of this book. But many of the other writers that I came across are in there as well – people like Alex Keegan (whose notorious Bootcamp I dropped in on as a visitor for their “Children in Need” extravaganza back in 2007) and Tania Hershman. If I’d had this book back then, I probably would have saved myself quite a bit of time. So perhaps that’s why it’s called “Short Circuit”.

Each chapter in the main part of the book is written by a different author and analyses one aspect of short story writing, such as the importance of theme (Keegan) or setting (Chika Unigwe). So in that sense it does appear to be a text book in the traditional sense of the term. But scratch a little deeper, and it’s really more a series of profound insights into the writing processes of some of the best short-form writers around. And in the end, that can tell you more about writing good short stories than any by-the-numbers text book.

And finally, I’m extremely grateful to the book for introducing me to the work of David Gaffney, whose “Sawn-off Tales” is an absolute delight.

And now a few words with Vanessa …

First of all, Vanessa, many thanks for dropping in here on your blog tour. I guess the question that I’d like to ask most of all is why you think the world needs this book.

Short Circuit isn’t anything to do with short cuts, and I wonder how many writers pick up ‘how-to’ books thinking they can cut a few corners?

Short Circuit is about the necessary hard work you have to do if you want to write well, but focussed hard work, with a few insights to save you some elephant traps. Its nothing if not honest, including the fact that there are a hundred different ways to skin a cat, and your creativity and mine may not work the same way!  But craft – there’s another matter. Craft is something solid, grounding.

And that’s why the world needs this book, (she said arrogantly…) because so many of them TELL you how to do things, so says the writer who wrote it. Not many do what this does – its more like sitting down with 24 different  successful and lovely people, who just want to share, in their own words, and in their own way.

Do you think that it will have any impact on the quality of short fiction being produced over the next few years? And will that help in the process of educating the general public to read more of it?

I hope so! If more and more budding writers can discover a passion for the form, and seek to do it well, that can only be a good thing, however they come to it. But they have to be stories that reach the reader, don’t they? Loads of people are switched off by the words ‘literary fiction’, for example. And lots of ‘literary’ buffs turn their noses up at erotica, for example, or chick lit, or horror, sci-fi, the genres.  So – Short Circuit is not actually about ‘literary fiction’ so much as ‘good fiction’ irrespective of genre. I don’t see the point of doing anything unless you do it to the best of your ability, thanks to my late Mum, who always said ‘if a thing’s worth doing it’s worth doing well.’

You’re going to be running a workshop at the forthcoming Get Writing conference organised by the Verulam Writers’ Circle on February 20th. Can you say a little about what you’re going to be doing there?

I am so looking forward to coming to Get Writing 2010!  It will be a packed session – so anyone who’s coming had better practice writing fast. I hope to answer a few questions, such as, “What makes a winning story?” “What makes a story stand out in a slush pile?” “How can you write when you feel blocked?” “What strategies can you discover to release MORE creative buzz?” “What is the flash writing process?”  These and more, plus questions from the floor, of course – so get those ready!

Thanks very much to Vanessa for taking the time to answer those questions. Short Circuit is available direct from Salt Publishing here (as is Vanessa’s excellent book of short stories, “Words from a Glass Bubble“, along with many other superb collections by authors featured in “Short Circuit”). You can book tickets for Get Writing here (and if you come, do say hi to me – I’m the tall awkward-looking one with the beard).