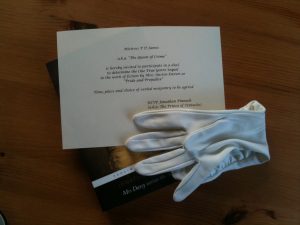 Today started with the alarming news that none other than Baroness PD James has jumped on the Pride and Prejudice sequel bandwagon. Outraged at this turn of events, I have duly issued the challenge shown in the picture via her agent. I was initially urged by some of my Twitter chums to propose a cage fight, but I fear that may be are some namby-pamby do-gooders who will baulk at the prospect of a nonagenarian engaging in the noble sport of Mixed Martial Arts. Such is the world we live in. Still, I await her response with interest.

Meanwhile, back in the real world, today’s blog tour stop is a cookery blog called Madeleines and Marmalade, the online home of one Rachel Pinnock, who may or may not be related to me. We discuss cake and aliens. Actually, there’s not nearly enough about cake to my mind.

Finally, in an exciting day all round, I can also now announce that I will be attending the launch of the 2012 Bristol Short Story Prize and I will be reading something there. As this is a serious literary event, I will not be reading from Mrs Darcy versus the Aliens, although it will be in sale in the Bristol branch of Foyles, which is pretty cool.