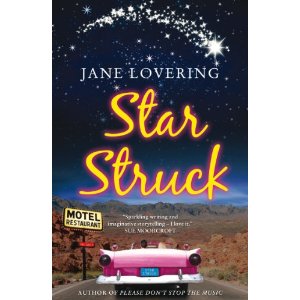 Today’s a bit of a first, because on Day 24 of the Never Ending Blog Tour™, I’m visiting Jane Lovering’s blog at the VERY SAME TIME as she visits mine. This may well cause some kind of violation of the laws of physics (eat your heart out, CERN) but we’re going to try it anyway.

Jane’s latest book, which happened to come out on the very same day as “Mrs Darcy”, is called “Star Struck” and I must admit I approached it with a certain amount of trepidation, because it is after all a romance. I am a bloke and Blokes Do Not Read Romance (although with the advent of the Kindle, more and more are apparently). However, I needn’t have worried, because it’s a terrific story, romance or no romance.

“Star Struck” is the story of Skye, one-time actress and sci-fi obsessive, and Jack, show runner for her favourite series, “Fallen Skies”. Both are damaged goods, but during the course of what sounds like a pretty dreadful (if all too convincing) convention weekend in Nevada, they meet and – no, we’re not doing spoilers here, thank you. You’ll have to read it to find out what happens.

It’s actually quite a dark story in places, but it’s constantly leavened by Ms Lovering’s engaging wordplay. I particularly liked the reference to a drugged Skye being dragged along a hotel corridor “like room service for a shy serial killer”. And later on there’s a beautifully sad couple of lines: “I could just feel the faint valium-induced haze pulling down across my mind. Nothing much, a whisper of net-curtain between me and the prurient world.”

To summarise then, if you’re looking for a romantic story with emotional depth and engaging characters in a decidedly unconventional setting, I would definitely recommend this one. Although there is one teensy-weensy problem, which happens to be the first thing I asked Jane about when she dropped in…

There’s just one thing that bothered me about “Star Struck”: the hunky, smouldering sci-fi writer. There are two adjectives there that don’t seem to compute. Or am I wrong? Name your top 5 SFWILFs, please.

Hunky sci fi writer is almost the definition of ‘oxymoron’ isn’t it? Therefore, I should like to present for your delectation – Toby Whithouse, Joss Whedon (I know, small and gingerish but I’d do him…) Hal Duncan, Neil Gaiman and Alan Garner (if I’d got to him thirty years ago). Enough? Because I could go on, you know… or maybe it’s just that my taste in men is a little questionable.

If you were given an unlimited budget to purchase anything from the Forbidden Planet online catalogue, what would you go for?

Forbidden Planet, with an unlimited budget? Do they sell chocolate? Sigh, no, I already know the answer to that one. I’ve lived without a FPlan for so long that I forget the sheer joy of walking through the door and being greeted by all those lovely geeky boys inside… at least, I think they were greeting me, their mouths moved and they blinked a lot. What would I buy? Probably the limited edition hardcover version of ‘Neverwhere’ – the story I’d most like to see buffed up and re-presented to the public. Plus, you know, Neil Gaiman…see above.

Star Trek. Every time. Preferably DS9 (which is still Star Trek in my opinion), but otherwise TNG. Original series is far too Alpha Male for me. And there’s far too much hair in Star Wars.

John, Paul, George and Ringo? Those are all Popes, aren’t they? Can I vote for Heraclas of Alexandria?

What is your favourite dinosaur and why?

Favourite dinosaur has to be Baryonyx. Mostly because it looks like someone took half a dozen unrelated animals, cut off the useful bits, stitched them together and allowed them to gallivant around the world eating fish. A bit like Rick Stein.

Finally, what question have you never been asked that you wish you had and what would the answer be?

And the question I wish I’d been asked? ‘Do you and Johnny Depp really have to make so much noise when you’re having sex?” And the answer, I shall leave you to guess…

Brilliant answers there, I think, apart from being hopelessly wrong about Star Wars. She does at least redeem herself by being right on the money about Branston. “Star Struck” is available online at all the usual places and is also on promotion in WHSmith Travel. Go and get yourself a copy now. And many thanks to Jane for dropping in!

Now let’s go and see what she’s said about me, eh?