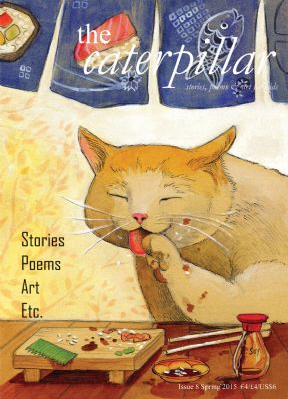 I’m beginning to think there are essentially two publication strategies open to the short story / poetry writer. Strategy 1) is to find somewhere you like and who likes you, and chuck everything you have at them. Strategy 2) is to systematically try to tick off as many different places as possible.

Most of the time, I lean towards option 2), but every now and then I like to try to return to old haunts. Often it turns out that these old haunts are not interested in what I have to offer (which is good, because I’d hate to be accepted just because it’s me and we got on so well last time), but every so often I get welcomed back. This, of course, is even better.

So here I am, back in the excellent Irish children’s magazine, The Caterpillar, with three poems: “The Sulphurous Sphygnum”, “The Limpopo Loon” and “Bodrills”. I’ve got quite a few of these things lying around, but I have absolutely no idea what to do with them. I would love to see them in a big illustrated book, but I suspect the chances of getting such a thing published are close to zero.

I’ve also been allowed back into the splendid Cease, Cows magazine, with a forthcoming flash entitled “Sleeping With The Fishes”. I don’t know when it’s going to appear, but I will let you know. In the meantime, here’s the last piece I did for them, “Wood“.

Finally, a lot of you writers out there (particularly the ones on MFA / CW MA programmes) have been getting into a bit of a lather about this rather snippy piece of clickbait. Must admit I found it pretty annoying too (particularly the ageist stuff). But then I read this splendid riposte by the ever-reliable Chuck Wendig, and I felt a lot better. A whole lot better.