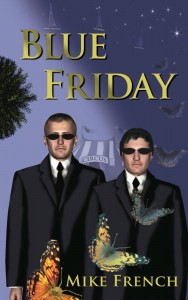 Today we take a well-earned breather from the “Dot Dash” blog tour and turn our attention to another writer, the excellent Mike French. I first encountered Mike in his role as editor of the splendid literary magazine, The View From Here, where he accepted a short story of mine and then proceeded to invite me onto his team as an occasional contributor. TVFH is always worth a read, by the way – there are some excellent pieces published there.

Last year, Mike brought out his remarkably ambitious debut novel, “The Ascent of Isaac Steward”. Not surprisingly, such an unclassifiable book took some time to find a publisher prepared to take it on, but all credit to Cauliay Publishing for having the necessary vision. Since then, Mike has wasted no time at all in getting his next book, “Blue Friday”, to market, this time with the exciting new imprint Elsewhen Press (who, incidentally are also bringing out my good friend Dave Weaver’s debut novel, “Jacey’s Kingdom”, very soon).

Mike very kindly agreed to drop in here recently and answer a few questions. Actually, the process took some time because my mind was somewhat elsewhere, what with my own book coming out. Which may also go some way to explaining why I completely managed to cock up the name of his book in my first question. He was, however, very nice about it, as well as being surprisingly informative…

Can you tell me a bit about “Blue Monday”?

Blue Monday is a single released by New Order in 1983 and is the best selling 12 inch of all time – I think The Beach was on the b-side but I could be wrong.   The song begins with a distinctive semiquaver drum intro. Hope that helps.  Don’t know why you asked me that – but heh it was a great record.  [*smacks head*] Anyway as for Blue Friday it’s about a society that has gone to extreme measures to try and protect the family unit. No overtime is allowed for married couples, there is enforced viewing of family friendly TV, family meal times have to be had at set times and there is a coming of age where twenty-five year-olds are automatically assigned a spouse by the state computer if they have failed to marry.  It’s not on vinyl. It lasts longer than seven and a half minutes and it doesn’t open with a semiquaver drum beat. It does however have a family protection agency that will kick the shit out of you if you deviate from the rules. Apparently it’s dystopian – with a touch of Douglas Adams about it – which was a surprise to me, I thought I was writing a how to manual on caring for potted plants.

That sounds intriguing! Would I be right in thinking that it’s a slightly more straightforward proposition than your first book, “The Ascent of Isaac Steward” (which I’ll be honest I found quite a challenging – although ultimately rewarding – read)?

Yes, Blue Friday has a linear storyline and simpler structuring than Isaac Steward.  Isaac was written in that way to reflect the disintegration of his mind and there was no need to employ that technique with Blue Friday.  I missed the seminar on how to write your first novel with Isaac Steward and jumped straight to a James Joyce style end of career novel that split the reviewers – half loved it, half just seemed to be scratching their heads wondering what on earth it was supposed to be.  So my plan is to work backwards and flip my career progression and regress into pulp fiction – so by around my tenth book I will hit a low and reach the Dan Brown stage of writing style and plotting structures.  I think looking back Isaac was an intensely emotional book to write whilst I had a lot more fun with Blue Friday – and there is more humour in it.  I was also really interested in writing using minimalism to shape my style so Blue Friday is cut back hard and is faster paced as a result. In the same amount of words I used in Isaac to describe a sunset, Blue Friday would have jumped out of the page, ripped your throat out and asked you to muse over the state of society.

That makes perfect sense to me, although I know there are a lot of publishing industry folk who would say that it’s a mistake to dabble in both literary and genre. Has anyone ever suggested to you that you should be using different pen names? If not, what would be your reaction if they did?

No-one has suggested I use a penname and Isaac was part literary and part slipstream so I think as Blue Friday is speculative it’s not a huge jump into a different genre.  However in general I would not be keen to use a penname – I can see in some cases it makes sense, like when there’s another author with a similar name or you wish to remain anonymous, but generally I can’t see the point.  So is Jonathan Pinnock your real name?  I heard your real name was Jonathan Peacock but Salt Publishing thought that your career as a writer and that of an paralympian athlete would confuse the public. ( By the way I saw you win gold you were amazing!)

Sadly my real name is indeed Pinnock, although I have the penname suggestion put to me in the past which is why I asked you. But I’m not keen on them either. Did you find that the fact of having successfully finished and sold a book made the process easier the second time around?

Getting the publishing deal for Isaac Steward really set me on a massive high – and I wrote Blue Friday whilst riding that wave.  It was a good feeling knowing that I was writing something that would definitely exist as a book this time.  And I also came at the whole process differently – Isaac was written in snatches of time when I was looking after the kids as a homedad – Blue Friday was written in a block that lasted 3 months – well the first draft anyway.  In the past I would have thought that that was not enough time but I was struck by how long Iain Banks takes to get a book written when I interviewed him a few years ago, so I was open to the possibility.  I think a lot of the work is done beforehand as it swills around in your mind and Blue Friday had been sitting in my head for years so when I started it just came pouring out like releasing a flood.

Which leads me very naturally to ask you what you’re working on now?

I’m working on a third novel called Convergence with the tag line “The story is everything. And everything will become the story.”  It’s apocalyptic and in its very early stages – there’s a synopsis and prologue but that is it so far. I’m struggling to get the time at the moment with Blue Friday just coming out and I’ve been editing a short story collection from the Luton Writers’ Group called Underground Rivers which was launched last Friday at Luton Central Library – there was quite a crowd with over 80 people packing the place out.

Excellent stuff. Can’t wait to hear more! In the meantime, “Blue Friday” is available from all good  bookshops – details available on Mike’s website. Do take a look.

2 thoughts on “Interview with Mike French”