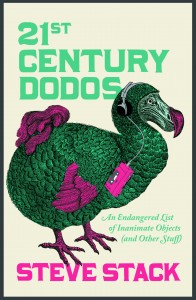 I’ve spent the last month as a virtual hobo, living out of a suitcase as I’ve travelled the interweb touting my wares (and in fact I’m still on the road as I write). However, it’s time to offer my premises to another lonely author pounding the mean streets of promo: Steve Stack.

Steve has just brought out his second non-fiction book, “21st Century Dodos”, and I have to say that from what I’ve read of it so far it is pretty ace – an excellent choice for your loved one’s Christmas stocking, and certainly a damn sight better than that sodding meerkat book that a well-meaning associate of mine gave me last year. What’s it about, I here you ask? Well, it’s a celebration of all those inanimate objects that were once commonplace but which have either already become extinct or are threatened with extinction – to quote from the blurb:

Now before I go any further, I should point out that Steve is actually the alter ego of publishing industry maverick Scott Pack, who runs The Friday Project as well as doing all sorts of other stuff for TFP’s parent Harper Collins. He’s also one of the duo behind the Firestation Book Swap (yeah, sorry about that) and an entertaining tweeter.

So whilst this purports to be an interview with Steve, some of it inevitably strays into Scott territory…

Which of the dodos in your book are you saddest to have seen go?

Well, I was a bit pissed off when Nestles (I insist upon the old pronunciation of ‘nessles’ rather than ‘nesslay’) stopped making the Maverick bar. And I think the death of the cardboard tube for Smarties was a low point on British confectionery. But I’ll nominate handwritten letters as the one I am most sad about. They haven’t died out completely but they are certainly endangered.

Which objects are still around that you wish had become extinct?

Are there any objects that are still around whose continued survival you find completely baffling?

Those low-slung jeans that young men seem to be wearing. I saw a pair last week with clear daylight between crotch and jean.

I’m interested as to why you chose to issue this book in hardback and e-book formats. Do you see paperbacks as becoming extinct sooner than hardbacks?

An excellent question, but if I am to answer it honestly then I need to be quite dull. We see it as a potential Christmas gift book and that little B-format jacketed hardback for a tenner is the perfect stocking filler.

As a publisher, do you see yourself threatened with a disintermediated extinction?

I think publishers have to prove that they bring something of value to the party if they expect to still be around in ten years’ time. But then so do agents. And booksellers. How depressing is that?

On a scale of 1 to 10, please rate the ugliness of the term “disintermediation”.

Does your decision to become a serial author indicate a desire to have a secondary career in reserve if/when such a disintermediation occurs?

It indicates a desire for some spare cash with which to purchase cake.

For some time you kept your identity as a writer secret. Do you have any other secret lives? Are you, for example, one of The Residents? If not, who would you like to secretly be?

Yes, I am the one with the green eye. I am also Humphrey, Buzby and the Secret Lemonade Drinker.

What’s the audience question most often asked at a Firestation Book Swap and what would your answer be?

What is your favourite cheese? And the answer is a cheese called Rachel.

Finally, if you had a pet dodo, what would you call it?

Some good answers from Steve/Scott there, even if he is completely wrong about Marmite. I actually think we should all club together and buy loads and loads of copies of the book so that he can afford to set up some kind of Jurassic Park-style cloning facility on Mauritius just so he can recreate Lulu the dodo. So here’s where you need to go in order to purchase the hardback, or (if you really insist) the ebook. And many thanks to Scott/Steve for dropping in. Do keep following his tour: yesterday he was at Stephanie Butland’s Bah! To Cancer blog, and tomorrow he’s visiting Rena Rossner.

6 thoughts on “21st Century Dodos: An Interview with Steve Stack”