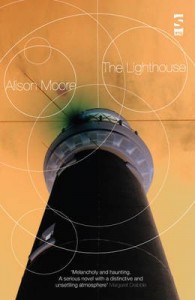 Let’s kick off with a disclaimer. There is, let’s face it, no way that I’m going to give this book a bad review. It is, after all, the most important book my publishers (yes, the same ones that are putting my own next book out later on this month) have ever produced and it would be completely batshit insane for me to give it anything other than a stellar write-up.

However – and it’s a big however – if it had turned out that I hadn’t liked the book, there would have been a simple option open to me: I could have just ignored it. The other however is that, as I’ve mentioned in an earlier review, I was already a fan of Moore’s work before I read this.

The other massive however is that “The Lighthouse” is a wonderful book.

It is an unashamedly literary book. Very little actually happens in it – it’s basically the story of a middle-aged bloke on a rather dull circular walking holiday in Germany in the wake of a marital break-up, interspersed with glimpses into the life of the proprietress of the hotel where he stayed the first night and where he will return to at the end. There are also flashbacks to the protagonist’s youth and early married life.

The protagonist is called Futh, and I’m sure it’s no coincidence that it’s close to the word “moth” (although I’d love to imagine that it was a completely unconscious choice on Moores’ part – that happens a lot more to writers than you might imagine). Because that’s what he is, constantly fluttering around inappropriate lights instead of making his own path through the world. Just, in fact, like the one that makes a brief, ultimately fatal appearance early on in the book.

Moore’s writing is wonderfully economical and the plot is tightly structured. Lighthouses are a continual reference point throughout the book, and you can have fun spotting new ones (you could, for example, consider the entire plot as following the path of the lighthouse’s beam as it rotates around Futh’s circular walking tour). The one thing that is truly surprising for such a “literary” book is what a page-turner it is.  I was enjoying it so much that I skipped through it in two or three days, fascinated to see how it turned out, and I wasn’t disappointed.

So if you want my tip for the Booker, this is the one. Wouldn’t it be utterly awesome if she won?

2 thoughts on “Review: “The Lighthouse” by Alison Moore”