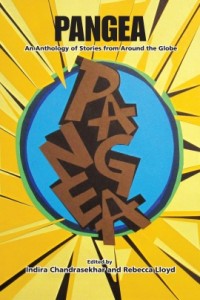 The unfortunate truth about a lot of anthologies produced by groups of writers (and I’ve been in a few) is that they are – to be completely brutal about it – pretty damn close to vanity projects. To be fair, this is actually no bad thing, because they often provide writers in the early stages of their careers the chance to see themselves in print – and that’s an important first step. But the flipside of this is that they rarely make for a satisfying experience for the reader.

So when I was asked if I fancied a review copy of an anthology produced by the members of the online community Writewords, I was more than a little wary. Until, that is, I realised that the list of authors included people like Vanessa Gebbie, Sarah Hilary and Joel Willans. And then I realised this was no ordinary writers’ anthology.

“Pangea” is a collection of thirty-four stories by twenty-five authors who come from, live in or have connections with a total of thirteen different countries – hence the name. Several of the stories have won prizes or have been commended in prestigious competitions and others have been published in top quality literary magazines, and in one case broadcast on BBC Radio 4.

As might be expected, then, it’s a pretty impressive collection. Not all the stories hit the spot, but it would be unreasonable to expect them to and the hit rate is a lot higher than average. I hate to single any out, but the standouts were Joel Willans’ beautifully understated “All For Just Fifty Baht”, Tom Remer Williams’ superbly constructed “You’re Dead”, Sarah Hilary’s splendidly quirky “The Wedding Fair” (which has the wonderful opening line: “Ella Derby’s Dad was in chocolate and her Mum was in shoes”), Vanessa Gebbie’s heartbreaking “Breakdown” and Sarah Leipciger’s gruelling “Some Game”.

All in all, this is a very entertaining and diverse collection. Recommended.

2 thoughts on “Review: “Pangea: An Anthology of Stories from Around the Globe””