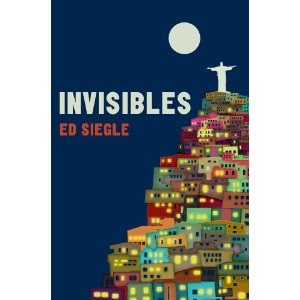 I guess I should start with a bit of a disclaimer. I met Ed Siegle when we shared a stage at Sparks 11 in Brighton last November and I subsequently went along to the launch of “Invisibles”, where I drank quite a lot of Myriad Editions’ wine.

However, I am not a man whose affections are easily bought, and I approached “Invisibles” with an entirely open mind. And what a fab book this is.

“Invisibles” is the story of Joel, brought up in Brighton by his glamorous mother Jackie after fleeing Rio following his father’s second incarceration. We join the story twenty-five years when Joel is convinced he sees his father on a news report on television. This is tantalisingly exciting for Joel, because he has long understood that his father is dead, and utterly appalling for Jackie, for pretty much the same reason.

Joel immediately decides to head off to Rio to find his father, where he meets up with lowlife Nelson, who promises to help him in return for money and the chance to escape out of the desperate situation he has found himself in.

This is an exceptionally assured debut novel (actually, sod that patronising “debut” epithet: exceptionally assured novel, full stop). The story of Joel’s search for his father is paced to perfection and cleverly interwoven with the back-story of his mother’s tempestuous marriage. The plot is intricate but, unlike some books by better-known authors I’ve read lately, doesn’t rely on outrageous coincidences to work (I’m looking at you, Kate Atkinson). The characters are well-rounded, engaging and totally believable, and the pages fairly sizzle with the heat of Rio.

I think what impressed me most about “Invisibles” was the sheer confidence of the writing. Siegle is an accomplished short-story writer and it shows. He isn’t afraid to drop you right in the middle of an exchange of street banter that a lesser writer might feel obliged to explain. And whilst this is on the surface for Joel a very middle-class search for his roots and identity, Siegle makes it abundantly clear that for Nelson it is a matter of life and death –  but he also very cleverly manages to find common ground between the two men, despite their very different backgrounds.

So, then, this is highly recommended. But be warned: reading this book may prove expensive. I now have a desperate urge to hear more Brazilan music, and I’m actively investigating what I need to hear next after wearing out my one Getz/Gilberto CD. As it happens, on the day after I finished reading “Invisibles”, my iTunes DJ turned up a Tom Jobim track that I wasn’t aware that I possessed (it was on a compilation) – “Cronica Da Casa Assassinada”, and I think this is would make a rather good soundtrack to a film of “Invisibles”. What do you reckon?

One thought on “Review of “Invisibles” by Ed Siegle”