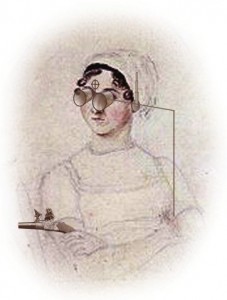 Well, then. It’s Jane Austen’s birthday today, which is as good a time as any to launch a new project that owes a considerable amount to her work. Well, it owes a small amount to her work, anyway. Now I can see the sceptics amongst you muttering to yourselves that he last thing the world needs is another bloody Austen mash-up, so let me reassure you that it is nothing of the sort.

Here’s how it came into being.

Back in late 2007 I was having a conversation with my good chum Toby Frost (author of the highly successful Space Captain Smith series) about “Jonathan Strange and Mr Norrell”, which I had just read. I described it to him and we agreed that it was essentially a Regency novel with added wizards. I then wondered what would happen if you wrote a Regency novel with added aliens, and we both thought that this was an excellent idea – along with all the other excellent ideas that tend to arise in the pub after a writers’ circle meeting.

But it wouldn’t go away. So in 2008 I scribbled a prologue and a synopsis down and submitted it to the Winchester Writers’ Conference “First 3 Pages of a Novel” competition. It didn’t place, but the critique was generally positive, even if it did start with the dreaded words “This is a brave venture!”

Now anyone knows that “brave” actually means “foolhardy” or “a really stupid idea to waste your valuable time on”, and as a result I put it to one side again. Then, in December of that year, I happened to mention the concept in passing to my friend Kate Nash, who was just setting up her new literary agency. She was really taken with it (mainly because she’s a published author of Regency romances herself), and basically said that if I could come up with three chapters by the London Book Fair, she would be willing to give it a go.

Then disaster struck. A certain zombie book appeared. This was immediately followed by everyone and their maiden aunt also announcing similar mash-ups. And the last thing I wanted to do was look as if I was jumping on some bandwagon (I have principles, you know). So I downed tools, and focussed my attention on short stories instead.

But you can’t leave a good project alone. And my wonderful friends at the Verulam Writers’ Circle kept on at me to continue with it, providing excellent feedback along the way. And I eventually did sign up with Kate Nash as my agent, and she is, even as I write, knocking on doors. Or whatever it is that agents do.

However, we both think that the project could do with a bit more of a nudge from the grass roots. So here’s the deal. Over the next few weeks, I’m going to be publishing “Mrs Darcy vs The Aliens” in twice-weekly installments, on a brand, spanking new blog, www.mrsdarcyvsthealiens.com. If you like it, tell everyone you know. I want this to be big. Well, obviously I do. In return, I promise to keep writing it, so you can find out what happens.

(By the way, isn’t that picture ace? It’s courtesy of my mate Dave Weaver, who is a damned fine writer as well. Remember his name.)

8 thoughts on “Mrs Darcy vs The Aliens”