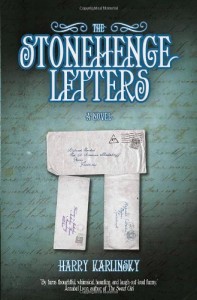 Just over a year and a half ago, I reviewed a most unusual book by Harry Karlinsky entitled The Evolution of Inanimate Objects. After reading that one I was intrigued to see what he might come up with next – or indeed if it was a complete one-off.

The good news is that he has come up with something else, and the even better news is that it is just as bonkers. As soon as I heard about it, I wanted to get hold of a copy, but because by TBR pile was already overflowing, I held off buying for a while. But when Scott Pack, who runs The Friday Project, the book’s publisher, was offering free review copies, I could no longer avoid adding to the pile. But just to be sure I wasn’t really adding to it, I snuck it to the top.

The Stonehenge Letters is a similarly peculiar mix of fact and fiction as the first book. The premise is that Alfred Nobel, as a result of an unrequited relationship with the remarkable Florence Antrobus, wife of the heir to the estate that included Stonehenge, develops an obsession with the mystery surrounding the monument. This obsession develops to the point where Nobel secretly offers a further prize to existing laureates for the best solution to the mystery.

And then the fun starts, as various luminaries – from Theodore Roosevelt to Marie Curie – pitch in with their submissions, ranging from the highly plausible down to the frankly daft (Rudyard’s Kipling’s contribution is particularly feeble). Sigmund Freud also provides an entertaining commentary via footnotes.

This isn’t by any means a conventional novel at all: there’s no plot development to speak of, and no real conclusion at the end. But the whole confection is great fun as well as informative and oddly thought-provoking. I’m still pondering what a weird old fish Nobel was, and how extraordinary it is that the prizes named after him are still so highly thought of. Highly recommended.

2 thoughts on “Review: The Stonehenge Letters by Harry Karlinsky”