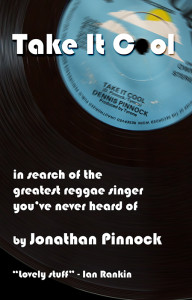 It’s been a long and twisty journey, but today sees the publication of my fourth book, TAKE IT COOL, by the wonderful Two Ravens Press.

I recently found the first draft of the first chapter that I read out at the Verulam Writers Circle, and the file is dated March 2005. However, I must have had the idea before then, because I seem to have started buying Dennis Pinnock’s records again in June 2004 (‘Woman be Fair’ / ‘Fair’s Fair’ from Action Records in Preston, via GEMM). So that makes it over a decade since I started out on this mad quest.

Why did it take so long? Probably because I had no idea who on earth would be interested in such a thing. Sure, whenever I read bits of it out to my friends, they’d say encouraging things, but that’s what friends do. I had no idea if the general public would be remotely interested (I still don’t).

I lost count of the number of queries I made to agents and publishers, but I’m pretty certain it’s in excess of 60. However, it wasn’t as if I hadn’t been through all this before. MRS DARCY VERSUS THE ALIENS went through at least 40 rejections before Proxima picked it up. This is not unusual, by any means. I know a lot of published writers and the only thing they all have in common is that they’ve stuck with it, even when the whole world seemed to be against them.

Anyway, the book is out now. I’m bloody proud of it. I think it’s entertaining, informative, funny and poignant by turns. You can read the first chapter for free here, and you can order signed copies from the panel at the side here —>, or direct from the publishers, or indeed that Amazon place. Go, go, go!

And for all my writing friends who are still trying to get that first (or indeed fourth) deal, this is the only thing you need to remember: