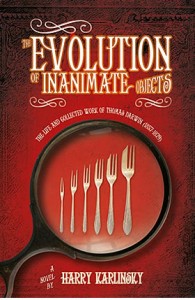 Just over a month ago, Scott Pack was offering free copies of this book on his blog. It sounded just the sort of thing I might like, so I  applied for one straight away. There were, of course, strings attached. Well, one string, actually. I have to write a review of it.

The problem is that it’s a very odd book. As John Harding says in his cover blurb, it’s “like no other book you have ever read”. I guess the closest thing I could think of to compare it to would be the fakery of Stanislaw Lem’s “A Perfect Vacuum”, or perhaps (and watch my quick spin into completely pretentious territory here) the early films of Peter Greenaway, or even (executing a handbrake turn into another medium altogether) Greaves and Blegvad’s classic album “Kew. Rhone.”

OK, the book, by a real-life Professor of Psychiatry (I’m assuming real-life, although there’s no reason at all to believe any of it, frankly), purports to be “The Life and Collected Works of Thomas Darwin (1857-1879)”. This Darwin was supposedly the eleventh and youngest child of Charles Darwin and his wife Emma, who died in an asylum for the insane in Canada at the age of 21 after contracting tuberculosis.

Darwin junior’s claim to fame was, supposedly, that he continued and developed his father’s work into the more esoteric – and, to be perfectly honest – completely bonkers area of inanimate objects (hence the title). A particular obsession (illustrated on the cover) was with the way in which pastry forks evolved from common or garden ones, with the strengthened outside tine as an acquired characteristic.

For a moment, the reader is tempted to say, well, perhaps that is – in a metaphorical sense, at least – how it actually works in practice. But it soon becomes apparent that Darwin is going much, much further than that: he actually thinks that the inanimate objects have evolved without human intervention. Karlinsky shows how this obsession develops, how it is received by the establishment and what the consequences are for Darwin.

The book is structured partly as a work of historical biography – full of believable insights into the Darwin household – and a discussion of Thomas Darwin’s collected works. Karlinsky’s experience of the academic scientific process is put to excellent use in the latter part. I particularly liked the picture he paints of the superintendent of the asylum and his attempts to publicise his own dreadful treatise by somehow getting Darwin senior to give it his imprimateur.

This is a very entertaining and highly original book, and I’d recommend it to anyone with a scientific bent or an interest in bent science.