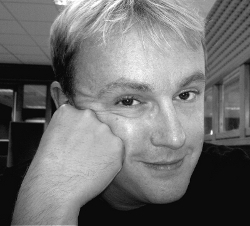 Ladies and Gentlemen, seeing as I haven’t managed to post anything myself for several weeks, may I introduce you to my chum Calum Kerr, National Flash Fiction Day supremo? He’s got a new collection out (of which more below) and he’s on a blog tour to promote it. Here he is…

My main one, the one I keep coming back to, is from the writer’s point of view. It says that flash-fiction is a story written from a prompt, without pre-planning, and written in a single session. This does, of course, refer only to the first draft – something which I am not always entirely clear to explain. This may be because I want people to engage with the form and not worry about the extra work that might be required to turn a ‘splurge’ into a perfect story. It may also be, given my sometime prodigious output, that I want to impress people which just how quickly I can write a flash. I have, it is true, published work that has taken little more than ten minutes to produce, and that it has required minimal editing because I was lucky in the way it came out, and also because I had more than a good idea of the tone, style, structure and content before I started the first word. But it is also true that I have published a piece only after many months of off/on tinkering and editing.

All of which is a way of saying that I have been examining my own definition of flash to see if I feel that it still holds true. You see, I spent last weekend at a creative writing conference in London, with writers from all over the world, and many of them were talking about flash-fiction. So, many lengthy (and not always entirely sober) discussions were had about this form, and I started to realise that one of my subsidiary definitions has started to become more important to me than the one about the method of writing that I outline above.

Before I get to the important one, let me just tell you my other other definition. This is about length and it does have something to do with what I want to say. You see, this is a largely external definition, created by editors and competition organisers. In order to have a category for flash-fiction, they impose a word limit. Sometimes it’s a thousand words, sometimes five hundred, sometimes, two-fifty, or one hundred, or fifty, or six. Or whatever number takes their fancy. It is a good way to knowing that something might be a flash fiction, but it’s no guarantee. I have seen stories of over a thousand words which I would still describe as flash-fictions, and I have seen many stories under five hundred which just don’t fit into my idea of what one is and what it should do. They were fragments, jokes, scenes, poems, and a host of other things, but not flash-fictions.

So, what, if that is the case, do I think is a flash-fiction? I must have another definition which allows me to say ‘this one is’ and ‘this one isn’t’.

The conclusion I have come to is that it’s about the use of words. It’s in the way that the piece conjures the world by implication, rather than description, and it’s in the way that it uses our understanding of what it is to think, feel, exist and abide – what it is to be a human being living in the world, basically – to encourage the reader to construct the story from the glimpse that the flash-fiction provides.

Let me give you an example, and talk you through it. Here’s a story which was originally written for Radio 4’s iPM programme in 2011 as part of the flash365 project. It’s one of the stories which made it into my new collection Lost Property. It was written by the above method, in a single rush, but the first draft was at least twice as long as the finished version below. A lot of cutting, editing, and tweaking went into it: trying to find a single word which would do the work of a sentence or a paragraph, removal of repetitions and of information that simply didn’t need to be there, creating a sense of something larger than itself.

I saw it on the way back from your funeral, my love. I know I should have been thinking about you. But I’ve been thinking of nothing else for so long, through the months of decline that my brain needed the break. Will you forgive me?

It was sitting in the window and looking at me. For a moment as the car passed I imagined holding it up to my lips and blowing one of those glorious bass notes.

I also didn’t mean to walk past it two days later when I went to collect your ashes. I stopped to look at it for a while, and again on the way back with you in my arms.

I found myself there again a few days later. And a few days after that.

And so this morning I returned and I bought it. I know you would have never let me have it, and that feels like a betrayal. But I know, once I’ve polished and cleaned it, when I bring it to my lips and blow, I will hear your voice shouting, ‘Henry William Henderson!? What is that appalling noise!?” and finally I’ll be able to cry.

Take a moment to read it through a couple of times and then I’ll tell you some of the things that you know about this story but which aren’t actually there.

At no point is the gender of the speaker, or of the loved one to whom he is talking, mentioned. We know it through the use of the name in the last paragraph. The use of the name and the syntax of the dialogue suggest that the imagined voice is that of a wife talking to her husband.

This comes to us in a number of ways. The use of ‘my love’ in the opening sentence feels like the speech of an older person, rather than a younger. The obsession with a saxophone – and a ‘bass’ saxophone at that – as opposed to a guitar or similar, also does this to some extent. The comment about ‘months of decline’, which could refer to any degenerative illness, but coupled with the use of the word ‘brain’ in the same sentence, suggests some kind of dementia, an illness associated more with older people. Finally, the name is doing still more work for us, as is the tone of the dialogue. ‘Henry William Henderson’, although a name which could belong to a younger man, feels older, and the way in which he imagines his wife speaking to him, also feels like an older person.

This may seem obvious, but look again, it’s not mentioned. The word ‘funeral’ in the opening sentence is doing all of the work in this piece. It tells what ‘the car’ is. It tells us what the ‘ashes’ are about. And it tells us something intrinsic to the human condition when Henry tells us that so far he has been unable to cry.

There is much more that could be said about this piece. It is one hundred and ninety-nine words long, including the title, and yet I have already managed to write nearly three hundred words discussing just some of its features. I could probably produce another thousand at least.

This, for me, is rapidly becoming the essence of flash-fiction. It is a story which, in its choice of words, the way they are juxtaposed, and its connection with the human condition, gives the reader a much larger picture than they are presented with, through the extrapolation performed in the reader’s mind. A single jigsaw piece is coloured and shaped in such a way that the whole of the puzzle can be inferred.

And this, I feel, is going to force me to change my definition of flash, because except in rare, lucky cases, this is not something which can emerge in that sudden burst of creativity. The groundwork can be laid, for sure, but it is in the editing, the crafting, and cutting and changing that these particular diamonds can achieve their true sparkle. 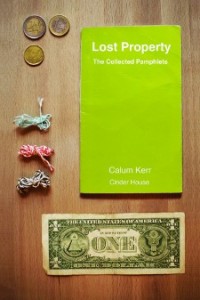 Calum Kerr is a writer, editor, lecturer and director of National Flash-Fiction Day in the UK. He lives in Southampton with his wife –  the writer, Kath Kerr –  their son and a menagerie of animals. His new collection of flash-fictions, Lost Property, is now available from Cinder House.

4 thoughts on “Guest Post: Less is More when you Flash, by Calum Kerr”