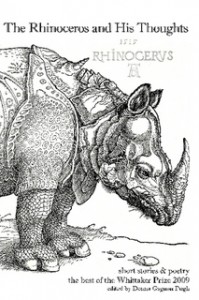 “The Rhinocerous and His Thoughts”, the anthology from the 2009 Whittaker prize is now available. This anthology includes all the short stories and poems that came either first or second in each of the nine rounds of the competition, so I’ve got two stories in there (“Farewell Symphony” and “The Magnolia Bedroom”, which both came second in their respective rounds) and two poems (“Spanish Echoes” and “Incursion”, which both came first). I could actually have had a third story in there, but I decided to hold it back because I thought it stood a decent chance in external competition – and in fact “Return to Cairo” did win 3rd prize at City of Derby. As it happens, I put “The Magnolia Bedroom” in for the Global Short Story Competition as well, where it got shortlisted.

As ever, Donna Gagnon Pugh has done a fantastic job overseeing production of the anthology. What really impresses me is that – as with “Scratching at Cardboard” and “Unforgettable Fire”, it looks like a proper, professional book. And that is a lot harder to achieve than you might think. Even better, I get my copy free because I came second overall in the short story comp!

Oh, and nearly forgot: Happy New Year, everyone! And a big welcome to new blogger Oscar Windsor-Smith (he’s in “The Rhinocerous …” too). His blog should definitely be worth keeping an eye on.

2 thoughts on “The Rhinocerous and His Thoughts”