This post was inspired by a comment under  the post from two days ago about an acceptance from the venerable Every Day Fiction, which asked three important questions:

Rather than give a cursory answer in the comments, I thought it might be helpful to write up my thoughts on this in a separate post (in the vain hope that it might go at least semi-viral and draw some much-needed traffic to this place).

Before kicking off with the answers, I’d like to throw in one more question:

And then, just to be perverse, I’m going to answer them in reverse order.

Why indeed? If you think the answer is “to make money”, let me introduce you to the real world. Yes, there are a tiny handful of people who make decent money out of, say, getting published in the New Yorker, winning the Sunday Times/EFG Short Story Competition and so on, but if you somehow imagine that writing short stories and poems is going to provide you with a regular income stream, you are almost certainly on the wrong planet.

Alternatively, you may imagine that by getting stuff published you are somehow building up some kind of reputation which will stand you in good stead when it comes to trying to get your first full-length work published. I’m really not sure about this. I certainly do recall one occasion when I bumped into someone in real-life who I’d always admired for getting stuff published in cool zines, who proceeded to greet me with “Are you Jonathan Pinnock? Gosh, you’re all over the place!” However, I’m also pretty sure that most agents will be unimpressed that your compelling cannibalism story “Angst with Alice: Turkey Street, Friday” was published in Issue 2 of The Goatfelch Review, and the unfortunate reality is that these are the people you’re really wanting to impress if you want to find a six-figure deal for that tenderly brutal coming-of-age novel of yours. The sad truth is that the only thing they’ll really be interested in is the manuscript of that novel, not your amazing track record.

I’m not being entirely fair here. I’m pretty certain that having my name pop up from time to time as a short story writer helped with Salt getting 100% behind Mrs Darcy versus the Aliens. And it obviously helped with Dot Dash that all but one (I think) of the 58 stories in it had already been published in various places (and had therefore been passed as fit for publication by one other independent editor). That said, I’m pretty certain that one of the other Scott Prize-winning collections that year only had one previously published story in it, so even that isn’t a hard and fast rule.

Incidentally, this did all get slightly out of hand when it came to the back of the actual book, resulting in two and a half pages of notes: 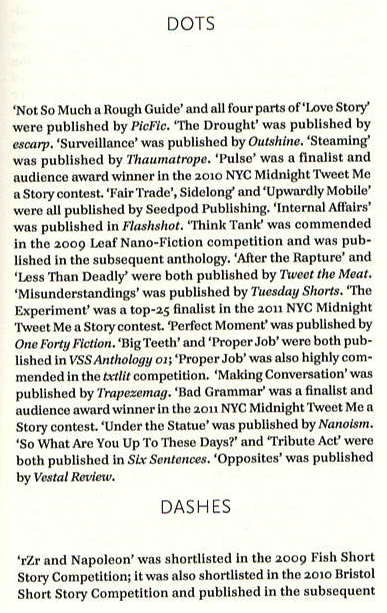 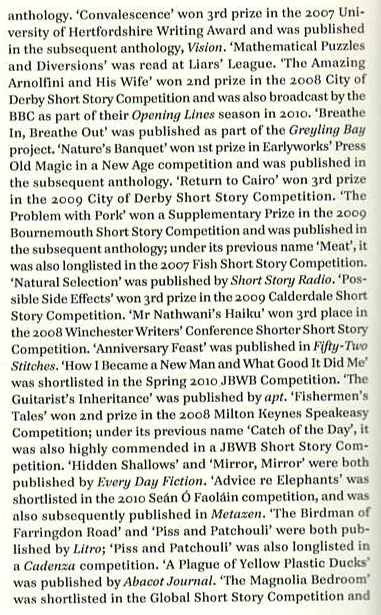 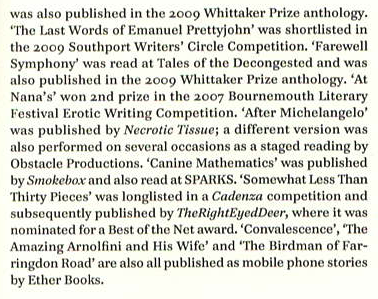 In the end, however, I submitted all of this stuff for publication for two main reasons. Firstly, I’d written it and I wanted other people to read it. Secondly, as a deeply insecure person, I wanted validation, and an acceptance from a complete stranger gave me that. I think those are both about as good as you’re going to get.

Can anyone submit things or does one have to be known already?

There are one or two competitions that require entrants to have some kind of publishing track record (the BBC National Short Story Award and the Sunday Times / EFG spring to mind) but generally speaking, competitions, magazines and anthologies are open to anyone. Indeed, some places take great delight in discovering new talent and may even follow your subsequent career with interest. So don’t hold back because you think you’re not worthy. Reach for the stars. And then when you don’t quite get there, try the Moon. And if that doesn’t work, try Basingstoke. The thing is, no-one ever needs to know about failed submissions. Just learn to deal with rejection (and, boy, does submitting stuff teach you that), suck it up and keep trying.

Where does one find out where to submit things?

Ah, now for the important question. There are a number of online resources that will help you find places that are looking for submissions.

Duotrope is a vast database of magazines, both print and online, with stats on acceptance rates, response times and so on. It used to be free but is now only available on subscription, so whether or not you spend your hard-earned £££ depends on how much you’re likely to be submitting. I would imagine that since going subscription-only, the stats are possibly less reliable, because there will be fewer datapoints. Or maybe they will be of better quality, because they’re all from paid-up subscribers? Dunno.

ShortStops, run by the excellent Tania Hershman, is a UK & Ireland – centred site that has comprehensive information on who’s taking short stories at the moment. She also sends out a regular newsletter that lists new opportunities.

Finally, the Thresholds forum, run by the University of Chichester, has an excellent list of competition and submission deadlines here.

Unfortunately, I’ve never managed to find anything equivalent to these resources for poetry, which may say something about poets as opposed to short story writers. If anyone reading this does know of anything, drop a note in the comments and I’ll update this post accordingly.

HOWEVER, I’ve actually found that the best way to find new markets for short stories and poetry is to STALK people. Writers love to brag about competitions they’ve won or been shortlisted for, and places that have published their stuff, and if you follow them on Twitter or hang out with them on Facebook (or writers’ forums), you’ll soon get to know what’s out there. Take a look at their websites, too. You may find stuff like this. Or this. Or this. (Yeah, I know. Sorry. I said I was insecure.)

Also, if you look at the magazines you know about, you’ll often find some other useful clues in the author bios. For instance, if you’ve chanced upon a story you like by Vince McFurby in the Fall 2015 edition of Clostridium Difficile, you may learn that Vince has also had work published in Splatter, BOLLOCK and What’s on in Peoria? (It will turn out that, sadly, BOLLOCK is on hiatus at the moment, but the other two may be worth a look.)

[UPDATE: Vanessa Gebbie has reminded me of this massively comprehensive (and slightly exhausting) list of magazines on the Poetry Library website. They also have an excellent list of competitions, ordered by closing date. I take back what I said about poets…]

How does one submit things?

There are only three rules:

So that’s it, really. Drop me a note in the comments if there’s anything I’ve left out or got hopelessly wrong. In the meantime, good luck.