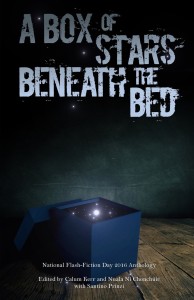 Is it that time of year already? Apparently it is. A week tomorrow (June 25th) is National Flash Fiction Day, 2016. I think I’m right in saying this is the fifth incarnation of the event, which suggests an impressive level of commitment from Calum Kerr and his loyal band of organisers.

As ever, there was a microfiction competition, for which my very short piece “Saved for Later” was longlisted – although it was up against some stiff competition (take a look at the second prize winner in particular) and got no further. I was slightly anxious that this might mean that I was going to miss being included in the NFFD anthology for the first time ever (as I didn’t even get a free pass this time – for the last couple of years I’ve been a microfiction judge). However, my submission “Family Values” was indeed selected, so my record remains untarnished.

And here’s the book itself – rather striking, don’t you think? You can buy copies here and if you take a look at the list of authors, I think you’ll agree with me that it promises to be rather special.