I was thinking it was about time we had another guest to this place, and as luck would have it, my chum Geoff Nelder is on (virtual) tour at the moment, promoting his latest book ARIA: Left Luggage (see below for how to purchase). Geoff is a terrific writer with a fiercely critical eye, which he has brought to bear on several of the stories in Dot Dash, either as a fellow member of the Café Doom online forum or as the judge of the Whittaker Prize.

The Lure of Bridges 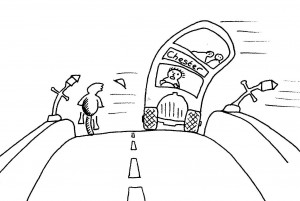 Whether by physical need or arts medium, sooner or later we are drawn over or under a bridge. They are the subject of international competitions because they link territory and by metaphor, people with their cultural differences.

As a climatologist I have been fascinated by and measured the effect of bridges on microclimates. When built in 1832, the Grosvenor Bridge in Chester, UK was the world’s largest single stone span for 30 years. High above the waters of the River Dee the bridge separates airflow, mainly from the west so that it jets over the parapet threatening to blow this cyclist into the path of buses. Three miles downstream is the village of Eccleston where Chester’s coldest spot can always be found under a private road bridge to the Duke of Westminster’s estate. The road dips to go under and so katabatic cold air pools there, 5 degrees Celsius lower than in the city centre.

In science fiction literature there is hardly a more iconic bridge than in William Gibson’s Virtual Light. The first in the Bridge trilogy, Virtual Light has a preposterous dystopian concept of a community living on the San Francisco Bridge.

Chevette Washington, a bike messenger, steals VR glasses at a party she crashes. Corrupt police, private security and other mysterious people are after her. One, Berry Rydell, rescues her from a security abduction even though he is part of it. He falls for her though their relationship develops very late in the story without time to develop.

The bridge concept comes from a short story Gibson was commissioned to write by an architect group in San Fransisco. One character is a shy Japanese sociologist, Yamazaki. He is in awe of the bridge and their people as shown in this superb setting piece: Note the poetic prose – repetition and echoing normally expunged by editors.

He’d first seen it by night, three weeks before. He’d stood in fog, amid sellers of fruit and vegetables, their goods spread out on blankets. He’d stared back into the cavern-mouth, heart pounding. Steam was rising from the pots of soup vendors, beneath a jagged arc of scavenged neon. Everything ran together, blurring, melting in the fog. Telepresence had only hinted at the and singularity of the thing, and he’d walked slowly forward, into that neon maw and all that patchwork carnival of scavenged surfaces, in perfect awe. Fairyland. Rain-silvered plywood, broken marble from the walls of forgotten banks, corrugated plastic, polished brass, sequins, painted canvass, mirrors, chrome gone dull and peeling in the salt air. So many things, too much for his reeling eye, and he’d known his journey had not been in vain.

A difficult novel to get into and I might have given up too soon had it not been written by the iconic Gibson. The first chapter is in the point of view of an anonymous ‘he’ so we don’t feel engaged. We never find out who he is. Too many characters are introduced early with mostly unexplained actions and provenance. The plot has a dichotomy of the super rich buying security, and the jobless scraping a living. Whether this is truly a sociological class division is dubious. By 1993 when it was first published such sub-plots had run their time. Besides which the poorest characters, such as Skinner (my favourite grumpy old man) is rich in his thoughts and relationships more than the wealthy characters.

Although I like the concept of the famous bridge becoming a home, it is unrealistic even in a post-affluent, possibly post-apocalyptic society. It is dangerous in high winds, subject to many summer advection fogs and cold winters. There must be safer and easier places on dry land to inhabit. The middle plot occurs in a storm on the bridge but cold and danger are barely there even though the blackouts and wetness are portrayed.

In spite of the credibility gap of the bridge, it is that community that makes the dystopian nature of the narrative more human and warm. A better book, in several ways than Neuromancer. It is cyberpunk, a hard-nose crime story, with characters and action set in the future.

In Virtual Light, no one crosses the bridge. In reality, we want to get to the other side, hoping for a better future. Some only make it halfway, using the bridge as a suicide high point, so to speak. The bridge being then a crossing from this life to … something else, or nothing. For most of us, bridges are feel-good symbols.

There are bridges in ARIA: Left Luggage. In Canada, near Lake Louise a simple bridge crosses ice-blue waters of the Bow River as ARIA-infected Manuel crosses from safety to danger, and back again – maybe. Between the Welsh mainland and the island of Anglesey is Menai Bridge where: ‘The suspension bridge looked beautiful in the moonlight, earlier rain glistened metallic greens like slithering jewels down the support struts. Nineteenth-century graceful catena curves and vertical steel ropes tried hard to sooth the troubled minds looking out for trouble.’ Near the end, our heroes need to cross the double-decker Britannia Bridge – night time, driving over railway lines, encountering barriers and maintaining the need for surreptitious, sneaky behaviour. A cliff-hanger on a bridge; what more could you ask? 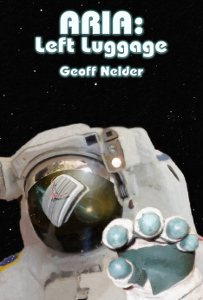 A bridge-like epiphany hit me cycling up a steep Welsh hill five years ago. An original idea: infectious amnesia. Not mass amnesia, but one you catch from being near someone else who also has it. Infectious amnesia doesn’t exist. Thank goodness, but imagine the ramifications if it did. You are on a bus when a man gets on with a new virus, one that loses memory backwards at the rate of a year per week. By the time the bus stops, all the passengers, including you, have ARIA (Alien Retrograde Infectious Amnesia). The driver has it too, and all her passengers until the end of her shift. You go shopping on the way home. Your spouse works in the power plant, your kids go to school. How long before industry stops, society breaks down, and your kids forget how to read, write and talk?

That’s why Mike Resnick, Robert J Sawyer, Jon C Grimwood, Brad Lineweaver and Charles Stross says ARIA is a fascinating idea, and makes us think of what is the most important things we need to remember in our lives.

Purchase ARIA: Left luggage from the usual online links or direct from the publisher.

Illustration from Nelder, Geoff Chester’s Climate: Past, Present and Future (1985)