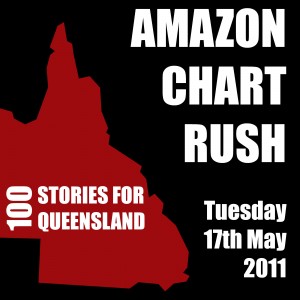 Remember the “100 Stories for Queensland” charity anthology? Well, it’s now out, and there’s a “chart rush” campaign on today. What it means is that we’re trying to get as many people as possible to buy it at once so that it gets into the top 10, thus garnering more exposure.

At the time of writing, the paperback is currently sitting at #2 in short stories and #3 in anthologies. Woo hoo! But that’s not enough! We want it to be #1! There’s some upstart called G K Chesterton who’s currently there in the short stories and some nonentity called Conan Doyle in the anthologies, but they’re bound to be rubbish and we’re far more deserving.

So have you clicked yet?

In case you were wondering, I’m in there with “The Wrong Bots”, a classy little piece about space pirates encountering a consignment of sexbots. Now you really want to read that one, don’t you? Bet Father Brown and Sherlock Holmes never had any adventures with sexbots.

You have clicked, haven’t you?

Normal service will be resumed one of these days. In the meantime, but only after you’ve clicked and bought the anthology, you can read a feature on me in the latest edition of Slingink All Shorts, available here. And in case Oscar’s wondering why I haven’t yet replied to his generous Versatile Blogger Award, I can offer no excuses, apart from the fact that I’m doing one of my occasional attempts to imitate a blue-arsed fly. Not a pretty sight, frankly.