I don’t usually listen to music when I’m writing, because it tends to interfere with my imagination. The only exception to this in my experience occurred when I wrote the first draft of my story “Mr Nathwani’s Haiku” in one burst whilst listening to an Asha Bhosle compilation. Well, there’s cultural tourism for you.

I don’t think I’ve ever actually seen any films where Asha Bhosle is singing on the soundtrack, which is something I really must rectify one of these days, because she has one of the most extraordinary voices on the planet. I think when I eventually get around to it I may well start with Caravan, because this clip, where she sings Piya Tu Ab To Aaja, is so utterly batshit crazy:

The music is a mad amalgam of everything John Barry and Ennio Morricone ever wrote, plus a whole load of other stuff including the cheesiest few notes ever played on a Hammond organ. And I really want to know what on earth is going on in that bizarre set (whose idea was the slide, for example?)

Actually, I’ll be honest: I’ve seen very few Bollywood films full stop. Last year, however, we watched Jodhaa Akhbar on the recommendation of one of Mrs P’s work colleagues, and it was probably one of the factors that swung us towards India for our hols. If you want epic cinema on the scale that Hollywood doesn’t do any more (and, no, CGI doesn’t count, I’m afraid), you can’t get much better than this (even though as far as I remember, it was pretty much ignored by the mainstream UK press when it came out). As it turned out, it was also a great way of preparing to visit Rajasthan, because the protagonists were both big players in the history of the area, and several of the places that we went to were key locations in the film (lovingly recreated in a Mumbai backlot).

So one of the things that we really wanted to do when we went to India was go and see a Bollywood film. We ended up going to the Raj Mandir in Jodhpur, which it turned out was one of the best cinemas in the whole of India. This is what it looked like from the outside: 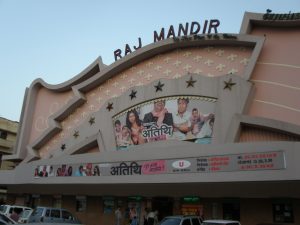 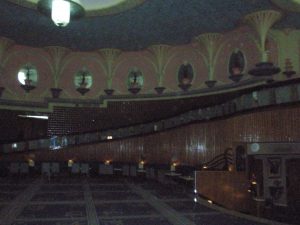 The film itself, Atithi Tum Kab Jaoge, was a comedy, and a fairly broad one at that, and it was pretty easy to work out what was going on most of the time (a fart joke being a fart joke in any language, after all) and there was a nice twist at the end. The central character was clearly a popular actor, because he got a round of applause when he first appeared. The only disappointment was the fact that there were relatively few song and dance numbers, but all in all it was an excellent evening out, and very cheap even in the ever-so-posh and ultra-comfortable diamond class seats. 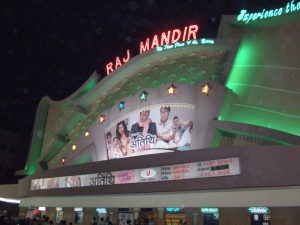