Right. We’re well overdue for another photo from India, so here are a couple of pictures of an opium ceremony that we attended in a Brahmin village near Rohet (not far from Jodhpur): 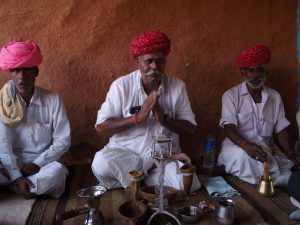 Strictly speaking, opium use is as illegal here as everywhere else in India, but the authorities tend to turn a blind eye to its traditional use in rural communities like this one. As with all drug-taking, there is an elaborate ritual involved and an equally elaborate excuse as to why the drugs are required. The ritual involves the guy in charge – the one in the middle of the picture above – offering the recipient the opium solution in the palm of his hand, after the solution has passed through a muslin bag several times to purify it: 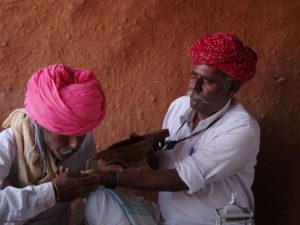 As to why they need to take drugs, well, it’s like this. They work hard in the fields all day, but because they are strict vegetarians, they need a little boost to help them. Of course, it’s only the men who do this, because it obviously wouldn’t be right for women to take part in the ceremony. It was left to Mrs P to point out to me later the obvious truth that there were an awful lot more women working in the fields – not to say building sites – than men. These women also seemed to be coping with wielding some fairly heavy equipment without apparent recourse to narcotics.

By the way, those fabulous turbans are most definitely not worn for the benefit of tourists. Pretty much all the men in rural Rajasthan wear them, although if you’re the oldest surviving male in your family you have the honour of wearing a white one. Frankly, I think they’ve got this the wrong way around. Wearing psychedelic headgear should be a privilege to aspire to, not a given.