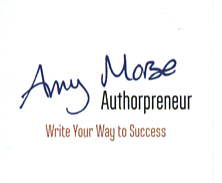 I went to a meeting at the Bristol branch of the Society of Authors the other day to hear Amy Morse talk about blogging for writers. Now you may be asking why I did this, as I’ve been blogging for (checks archive) almost ten years?

Well, first of all, I try to go to as many local SoA meetings as I can because it’s nice to meet other writers from time to time and it’s a very relaxed and informal event. Also, I feel obliged to turn up because I’m on the committee.

But I did wonder if it might be worth taking a moment to reflect on whether I am actually doing this right, even after all this time. Or perhaps especially after all this time. Incidentally, exhibit A for needing to do this is right there in the top left hand corner of this post. Did I take a picture at the event? No, of course I didn’t. So I ended up sticking up an image culled from Amy’s business card. Good work, Jon. Good work.

Amy Morse has been blogging since 2013 and started doing it to promote her writing. She has successfully self-published or crowdfunded four books under the name Amy C. Fitzjohn. Her plan was to make a note of one interesting thing she’d done each day and then blog once a week about those seven things. This worked so well that in 2015 she set a consultancy called Learn To Love Your Words to teach blogging skills to businesses.

Quick statistic to throw out: blogging brings 97% more traffic to your website. [Note: I haven’t checked any of the numbers given here. Nor did I ask where Amy got them from. Massive failure of investigative journalism there.]

Amy’s talk centred around her Five Blogging Myths. Here they are, along with what she said by way of refutation (plus my comments in italics):

In fact, 82% of consumers enjoy reading blogs about their favourite brands (and don’t forget, we authors are brands too). Across the internet, there are 329 million blog views every day. [Must admit, I don’t read blogs as regularly as I used to, mainly because most of the people I used to follow seem to have either stopped at all or have become extremely irregular. I blame Facebook and Twitter. A good counterexample is Lev Parikian, who is astoundingly regular and has an excellent mailshot as well. Interestingly, he was always an intermittent blogger, but I think he started taking it seriously while he was soliciting supporters for his current Unbound project (and I am really looking forward to getting my copy) and he’s kept on with it during the publication process.]

2. I Have to Blog Every Day

No, you don’t. Aim for once a month as a minimum. This is enough to poke Google into action so that you don’t slip down the search rankings. Once a week is optimal. [There was a brief discussion about how long it was safe to leave a blog before it starts looking stale. Amy reckoned two months was the maximum here. I’m sure I’ve had longer gaps, especially over the last couple of years when I’ve gone through some serious soul-searching about my writing. Did I tell you that? I will one day soon.]

On the contrary, you have loads to say. Talk about the process of writing. Talk about the themes behind your work. You’re a writer, for heaven’s sake – you live for stories! Write about what you love. Tell the story behind the story. [In my case, there’s a direct correlation between how much I blog and how confident I’m feeling about my writing. It’s almost as if I need permission to blog. If I’m feeling confident, I’ll blog about anything. If not, I tend to wonder why the hell anyone would be remotely interested in anything I have to say. This is pretty silly, really.]

No you don’t. The best writing says a lot with few words. Aim for 500 – 1200 words. [Yep. I can’t say I’ve rambled on for longer than 1200 very often – if ever – but I’ve been guilty of sticking up tiny posts just to say “Ooh, look at me, my alien zombie nipple-piercing story had just been accepted by Puddle of Vomit”, followed three months later by  “My alien zombie nipple-piercing story is now up at Puddle of Vomit – go take a look”.]

At this point, the talk was diverted into a discussion on tags and hashtags, and the importance of using tags for Google SEO and hashtags for Twitter (up to 3) and Instagram (loads). [I’d never really appreciated the importance of  tags before, and I don’t think I’ve ever used them, which may be one of the many reasons why this blog languishes in obscurity.] Amy also introduced us to the YOAST plug-in for WordPress, which gives you instant tips on how to improve your posts as you write them. [I have now installed it and I can see it may well turn you into a complete obsessive.]

Prioritise! Make time! If you’re going to blog, go for it. Amy ended by quoting Master Yoda: “Do or do not – there is no try.” Always good to finish on that one.

This was a thought-provoking evening and even as a seasoned blogger myself, I learnt a lot. Time will tell if I manage to put any of it into practice. Now to sort out some tags for this one…

2 thoughts on “Amy Morse at the Society of Authors, Bristol”