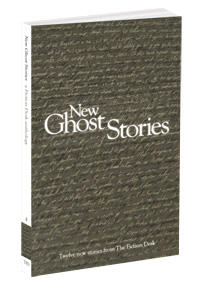 The Fiction Desk’s sixth anthology, “New Ghost Stories” has just been released, and what a splendid collection it is. Take a look at the stellar list of contributors, for one thing. I’m really looking forward to reading it myself, and not just because there’s one of my stories, “A Whole Bloody Century”, in it. Go on, treat yourself or one of your loved ones to a copy now.

Had a nice piece of news at the weekend, in that I emerged (after six gruelling rounds) as the winner of the fiction section of this year’s NOT The Whittaker Prize. This competition is the semi-official successor to The Write Idea forum’s Whittaker Prize. The contest involved writing a new story every two weeks to a set of prompts. Following this, we all scored each others’ entries anonymously and totted up the results. The best thing about it is that I now have half a dozen new stories that I can eventually submit elsewhere. Some of them will need a severe edit, and one or two may end up in the wastepaper basket, but they’re all about subjects I would never have dreamed of writing about before.

Finally, I had a really nice rejection this week, from The Letters Page. It was nice for two reasons. Firstly, it was handwritten by the editor himself, none other than Jon McGregor. Secondly, because the writers whose work was accepted included the awesome George Saunders and Kevin Barry. One of those rejections that counts for a thousand lesser acceptances, and a nice end to a year that’s been slightly lukewarm at times from the writing point of view.

4 thoughts on “New Ghost Stories and other stuff”