I very rarely let go of an idea, even if it takes years for it to come to fruition. This can be quite annoying if I’m trying to focus on something important, like the day job or promoting THE RIDDLE OF THE FRACTAL MONKS or writing BAD DAY IN MINSK. But sometimes external things happen that bring an old idea to the fore and finally get it out of my head.

I’ve always been attracted by the idea of merchandise since I found out that most rock bands tend to make more money out of tour T shirt sales than actual music. So not long after DOT DASH was published (i.e. getting on for eight years ago), I had the idea of writing short stories on the sides of mugs and somehow selling them through craft shops. My plan was to buy a load of plain white mugs and paint the stories onto them. Yes, I really had thought this through, hadn’t I?

Fortunately, the thought of traipsing around Bristol and the surrounding area trying to sell these things to shops (not to say the whole issue with mass production) put me off and I gave up on it. But a few years later, I needed to get a mug made to a specific custom design for my wife and it turned out that it was relatively easy to do. So the mass production issue was solved, even if I didn’t make the connection at the time.

Skip forward to the beginning of this year, when I was putting a website together for Lev Parikian (whose forthcoming book INTO THE TANGLED BANK is getting rave advance reviews, by the way), and a key part of that was having a shop where he could sell some merchandise that he was developing (some rather excellent T shirts, tea towels and posters and so on – well worth a look, BTW). This involved getting into the world of WooCommerce, and having done that with Lev, it seemed like a good idea to change my own singularly kludgey shop that I was using to sell signed copies of my books into something a bit more professional.

At that point, I realised that there was no longer anything holding me back. I now had all the tools to develop and sell my own merchandise. So here we are. Here are my first five mugs, all for sale in my shop: 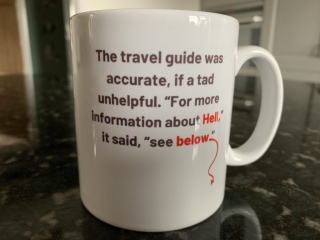 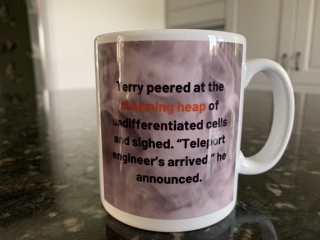 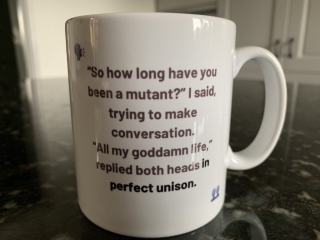 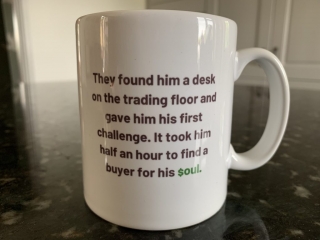 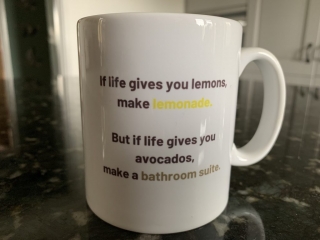 Now who wouldn’t want a mug with a complete short story from an award-winning collection on it? I know I would. And so would you and all your friends. The shop is open for business.