It’s interview time again, folks, and today’s lucky victim is the lovely Jane Travers, who you may recall gave me a grilling about “Mrs Darcy versus the Aliens” a few weeks back. As it happens, she’s now on her own blog tour to promote a rather remarkable recipe book she’s put together called “Tweet Treats”. I’ll let her explain what it’s all about in a minute, but whatever you do, stick around to the end of the post, because there’s a GIVEAWAY. Oh yes.

Explain the concept of the book in less than 140 characters.

Oh now, that’s just nefarious, mean and dastardly. I won’t do it, I tell you! Oh alright then.

“Tweet Treats” are short, simple twitter recipes for real people. The recipes come from ordinary people and celebs, all royalties go to MSF. (That was 140 characters exactly! God I’m good.)

(MSF = Médecins Sans Frontières, by the way, but you people probably knew that already)

Which came first: the idea of the book or the desire to do something for charity?

The idea for the book. I guess I’m not that naturally altruistic! The idea really hit me out of the blue, but as soon as it was formed I knew that it had to be for charity. I’m a good girl, I am.

Why MSF in particular?

‘Cos they’re like, awesome and stuff. What, that’s not enough for you?

MSF do incredible work and I have huge respect for them as an organisation, but also they are a global charity. I knew I would get recipes from all over the world so wanted to choose a charity that would be equally relevant in every contributing country. I also wanted to choose an organisation that was unaffiliated with any religious or political organisation, and MSF fit the bill precisely. Plus, at the time I came up with the idea, the earthquake in Haiti was still very much at the forefront of people’s minds, and MSF were on the ground there providing medical aid.

(Agreed. MSF are a fab organisation.)

Was there a point at which you began to realise that the project might work?

Haven’t gotten there yet. Seriously, I keep expecting something to go horribly wrong, for the publisher to tell me the book isn’t selling, for people to complain about the recipes, etc. But I  am really proud to have brought it this far, to hold a published book of recipes in my hand that has my name on the spine. Maybe it will work. Will it work? It might work…

About 50,000 tweets too long. And if you tell me that I could have written 8 novels with that number of words, I’ll smack you one.

(I didn’t say anything. Honest.)

What would you say to someone who hasn’t tried Twitter yet or who has tried it and given up?

What do you mean that’s not politically correct? Oh alright then, I’ll try harder. Spoilsport.

Twitter is the most social of social media, where you can become one of a large community of people with shared interests and experiences. Because of the brevity of tweets (140 characters) there’s no room for waffle, so people are forced to be brief and interesting.

Actually I think there should be a law passed stating that no-one can speak in longer than 140 character bursts, too.

What do you mean that’s overkill?

Have you tried every single recipe in the book?

Pshaw! No. Have you seen how many there are? The great thing is that I keep trying new ones from the book and adding to my own recipe repertoire. Today, for example, I tried Butternut Squash Soup from page 67 and it was nom! Given that I was a complete soup-phobe before this, that’s good going for me.

Parmesan. I eat great snowdrifts of it on top of pasta or risotto…. Mmmmm….

(That question was specially for any Firestation Bookswap regulars reading this, by the way. Cheese is a very important thing to them.)

Which celebrity would you have really liked to get a recipe from but failed to for whatever reason?

Stephen Fry, only because he’s like the patriarch of Twitter. Unfortunately though, despite best efforts, I guess his timeline was too busy and he just never saw the requests. It was a huge coup for me to get my most coveted celebrity though, Neil Gaiman (@neilhimself). I read recently that he’s now the single most influential tweeter out there. So having a recipe from him is nice.

What’s your next project?

Something that will actually make ME some money, I hope! Everything I’ve had published so far has been for charity. I’m really not that nice a person, you know. Show me the money, I say!

But if you must have details, I’m working on a YA paranormal romance which I hope will be a trilogy, finishing a women’s fiction and have a few other things in the pipeline too. Looking forward to having some time to work on them! 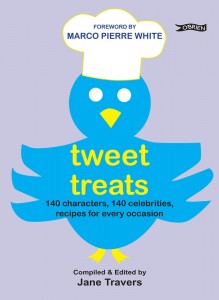 Many thanks for some terrific answers there, Jane, and masses of luck with the book! And now for the important bit: THE GIVEAWAY! All you need to do in order to win a copy of “Tweet Treats” add a comment below, saying in NO MORE THAN 140 CHARACTERS why you think you should have one. The most entertaining and creative answer added in the next week will get a free copy sent to them, wherever they happen to be in the world.

Well, what are you waiting for?