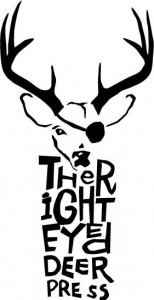 So, Happy New 2009 to all this blog’s readers. And, specially for you, here’s a link to a download of the inaugural issue of TheRightEyedDeer, which contains my story “Somewhat Less Than Thirty Pieces”, which was accepted on December 28th and thus becomes my 42nd and last hit of 2008 (up from – er – 4 in 2007). TheRightEyedDeer is (as you can probably guess) the brainchild of Donna’n’Doug, the team who took over The Write Idea earlier this year and who seem to possess inexhaustible amounts of energy and ideas for new projects. Good on ’em – can’t wait to see what they come up with in 2009.

“Somewhat Less Than Thirty Pieces” was longlisted in Cadenza’s March 2008 competition, and is a free-wheeling piece of meta-fiction that has got a bit more meta with every new version. I’m particularly pleased with the footnotes, which is why I’m really glad that it’s finally been published in a PDF format magazine rather than HTML.