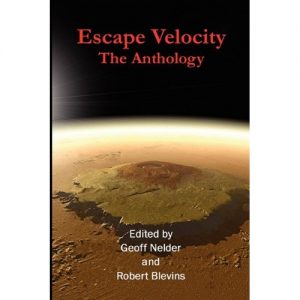 The Escape Velocity anthology has just been launched, containing works by loads of good people such as Cathy Edmunds, Paul Freeman, Rob Harkess, Geoff Nelder and Bec Zugor. And me, with “Symbiosis”, a jolly little tale of the love between a girl and her parasitic worm.

“Symbiosis” was originally a much more straightforward tale, but acquired an extra level of weirdness on the suggestion of my VWC chum Toby Frost – which is as good an opportunity as any to point you in the direction of the new audio version of “Space Captain Smith”. Anyone who’s read the trilogy will need no further prompting – and if you haven’t already read the books, why on earth not?

So, two plugs for the price of one today.