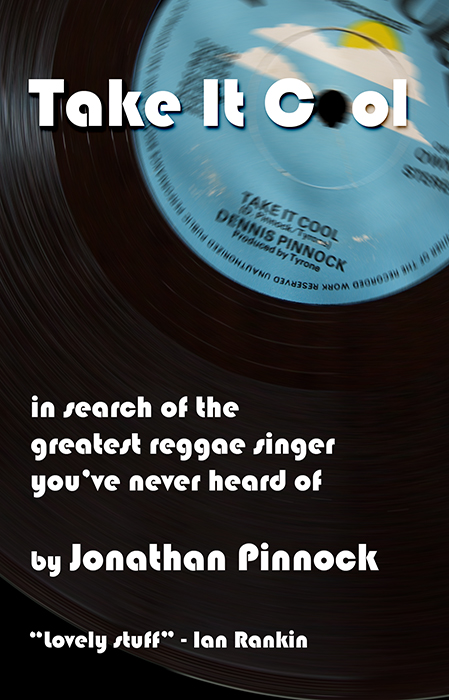 If you’re born with the name Pinnock, you are just two consonants away from disaster, and that proximity pretty much wipes out any chance you have of being cool. Jonathan Pinnock knows this. He has never been cool. The word “Pinnock” is printed through his every bone like Brighton rock. But then one day he finds out about Dennis Pinnock. That’s Dennis Pinnock, the reggae singer. The reggae singer who recorded over twenty singles on a dozen different labels but never made it to a full-length album, despite working with some of the biggest names in black British music.

So who is this Dennis Pinnock guy? Is he still alive? Is he a big star somewhere? What is a black man of West Indian origin doing with that daft surname? And what in God’s name is a white, middle-class, middle-aged bloke doing on a quest like this anyway? In the course of the search for Dennis Pinnock, Jonathan digs up some long-forgotten cuts of reggae music, tries to re-inter one or others, marvels at some unfeasibly shiny suits and encounters some unpalatable truths about how his surname might have crossed the race boundary.

Take It Cool was published by Two Ravens Press in July 2014.

Very conscious of his white, geeky, prog-rockloving persona, as well as the ultimate pointlessness of his obsession, he makes funny and self-deprecating company.

A genealogical quest for the internet age, it’s told with a healthy dose of self-deprecating wit. A treat for family historians and ‘old skool’ music fans alike. If you’re an addict of both, you’ll be laughing

Family Tree Magazine, who made it their top choice for September 2014

It’s refreshing to hear an unpretentious voice on reggae

It is intriguing, unusual and very, very funny. I honestly can’t think of a better, more off-beat summer read.

Pinnock writes with verve and humour … This is recommended for fans of UK reggae, music lovers, record collectors, family history aficionados and people interested in Jamaican history and the history of slavery.

Having read Jonathan Pinnock’s fiction, I expected him to turn what could be a plodding piece of research into something interesting and fun – and he did! The different threads are easily followed, and build an amusingly-told story that held the attention of a non-Pinnock with no interest in reggae.

There are more reviews here, a sample chapter here and information on where to buy the book here. There are also a whole load of extra features here.

And in case you were wondering where that cover quote came from, this is how it came about. While I was struggling to find a publisher, I decided to serialise the book online (just as I had done – successfully – with Mrs Darcy versus the Aliens). I knew that Ian Rankin was a music geek, so I thought I’d ping him to see if I could get him to read some of it. This is what happened:

@jonpinnock You had me at Pinnock's Paranormal Payback… Lovely stuff…

And then, when I finally did find a publisher, this:

@jonpinnock Hey, it's public domain – you can use it!