The Riddle of the Fractal Monks 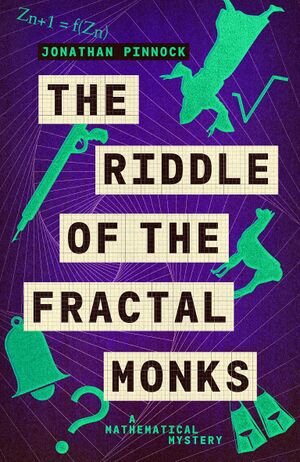 The Riddle of the Fractal Monks

The Riddle of the Fractal Monks is a book by Jonathan Pinnock. It is the third in the Mathematical Mystery series and was published by Farrago Books in April 2020.

Tom Winscombe and Dorothy Chan haven’t managed to go on a date for some time, so it’s a shame that their outing to a Promenade Concert is cut short when a mysterious cowled figure plummets from the gallery to the floor of the arena close to where they are standing. But when they find out who he was, all thoughts of romance fly out of the window.

Just who are the Fractal Monks, and what does Isaac, last of the Vavasors and custodian of the papers of famed dead mathematical geniuses Archie and Pye, want with them? How will other figures from the past also demand a slice of the action? And what other mysteries are there lurking at the bottom of the sea and at the top of mountains? The answers lie in The Riddle of the Fractal Monks.

The reception to the book was generally favourable, with one reviewer on Amazon comparing it to P.G.Wodehouse.

Nope, haven't done this bit yet.
Retrieved from ‘http://www.jonathanpinnock.com/wiki_archiepye/index.php?title=The_Riddle_of_the_Fractal_Monks&oldid=1204’
Categories: