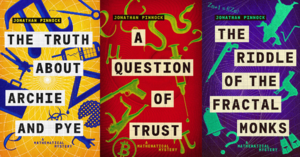 The first three books in the series

The Mathematical Mystery Series is a sequence of humorous novels written by Jonathan Pinnock and published by Farrago Books. There are currently three books in the series, with a further one in the pipeline. The books are intended to be read in sequence, although each one contains sufficient information about previous events to enable a reader to join part way through. And if that isn't sufficient, there is always Archiepyedia on hand to help as well.

As the title suggests, each of the books centres around some kind of mystery, which may or may not have something to do with mathematics. The connection with mathematics can be a little tenuous at times, which can be confusing for any readers who happen to pick up the books expecting that they may have to solve little problems along the way. However, this does at least mean that it is entirely possible for the casual reader with no domain knowledge whatsoever to enjoy them. The topics covered include Euler's identity, Fibonacci sequences and fractals.

Despite the mystery and mathematical elements, the books are mainly played for laughs.

Books in the series[edit]

Characters in the series[edit]

Animals in the series[edit]

Locations in the series[edit]