Master Thomas of the Grand Duchy of Finland 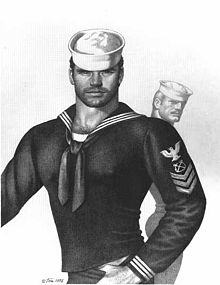 Master Thomas of the Grand Duchy of Finland (8 May 1776 – 7 November 1845) was a military portraitist and illustrator famed for his work during the Napoleonic Wars. His muscular portrayals of men in uniform were widely circulated among both the troops in Wellington's army and their many camp followers. These works are noted for their delicate texture and accurate anatomical detail, gained from many long nights of study in the inns of naval towns such as Portsmouth, Plymouth and Brighton. Lord Nelson is believed to have been a particular admirer of Master Thomas' works and, following his death at Trafalgar, a vast collection of etchings of sailors was discovered hidden away in his bunk. Following this disclosure, Lady Hamilton is said to have commented that

while refusing all requests to elucidate further.