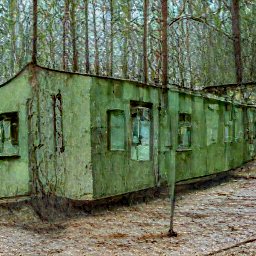 The Pripyat Glorious People's Kindergarten Forest Camp and Ideological Retraining Centre is an abandoned facility located deep in the heart of the Chernobyl exclusion zone. In recent years, it has been used as a hideout for the paramilitary wing of the Gretzky mafia family. The accommodation is spartan and the regime is strict, verging on brutal. The day starts with group exercise, after which the residents of the camp are divided up into various work parties, unless required to go on some kind of mission. Most of the food is grown on site and includes some previously unknown varieties of phosphorescent cabbage. However, rumour has it that the senior members of the family dine nightly on the finest steak and vegetables imported from outside the zone.

Tom Winscombe will attest to the veracity of this rumour, having stolen a couple of the steaks to keep the guard dogs happy while he made his escape.
Retrieved from ‘http://www.jonathanpinnock.com/wiki_archiepye/index.php?title=The_Pripyat_Glorious_People%27s_Kindergarten_Forest_Camp_and_Ideological_Retraining_Centre&oldid=2614’
Categories: