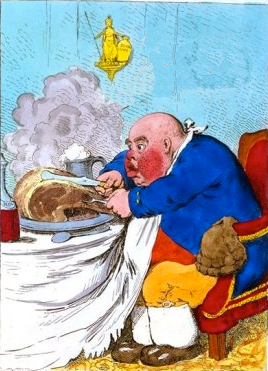 Regency food was very different from present-day English fare in almost every single respect. For one thing, it would not be possible, in our modern safety-conscious world, for anyone to consume the sheer quantity of food and drink normally taken at a single Regency meal, except under close medical supervision. Indeed, when the BBC covered the Regency period in their Supersizers series, one of the presenters, Sue Perkins, temporarily swelled up to five times her normal size and was forced to confine herself to radio work for several weeks. Her co-presenter, Giles Coren, fared little better, suffering a terminal unstressed syllable.

Breakfast was normally taken at around 10 o'clock in the morning and consisted largely of bread as well as various forms of cake, this being several decades before the arrival of John Harvey Kellogg and his crusade against master bakers. It was not unusual to get through as much as half a pound cake in a single sitting. This might be followed by a brace of guinea fowl, making a grand total of 52 shillings, a considerable amount of food even before taking decimal conversion and inflation into consideration. This was washed down with tea, coffee or - more frequently - half a pint of gin. For the children of the household, this was watered down slightly, the resulting drink being referred to as small gin. Liver disease was a constant blight among the offspring of the landed gentry.

Luncheon lasted from noon until the middle of the afternoon and consisted of a selection of meats, such as half a pig or Trollope's Trolleys, a simple dish consisting of a pair of venison haunches, served either crossed or splayed depending on the season. This would be accompanied by a bottle or two of a robust claret, such as Chute de l'Echo. Men, incidentally, were forbidden to eat vegetables in order to preserve their moral fibre during the Napoleonic Wars, whilst ladies were discouraged from pursuing the

perverted cult of the broccoli[citation needed]

High tea was taken at around six o'clock and usually consisted of unpretentious fare such as Beef Wellington - essentially brisket boiled until it was the consistency of rubber and then coated in batter - or Frenchman's Knob, a kind of sausage made from a potent mixture of offal, garlic and herring skin. In fashionable circles, this would often be accompanied by a refreshing cocktail such as a Midsummer Mimsy or perhaps a Stiffy Sour.

When it was time to retire for the night, a gentleman would prepare himself by drinking a glass of milk with a double tot of brandy and munching on a BLT (bacon, lamb and tongue) sandwich. Following this, if he was a considerate man and he wished to have intimate relations with his wife, he would cleanse his mouth by sucking on a raw onion. Surprising as this may sound to our modern ears, this practice was considered to be a highly effective contraceptive.